Maybe I should title this, “Lordy! the flies!”, or “Flies of the Chesapeake.” At any rate, being very intelligent readers, you get the drift of this post.

After departing Havre de Grace (mid-Sept) a massive swarm of teeny insects (I call them black pepper flies) descended upon Twin Sisters.  Before I realized it they were inside, being teeny enough to fit through all the screens. We had to close up, which was a huge bummer given the very warm and whisper breeze day.

12v vac in hand I attacked every inch of every inside corner in our salon area until, hours later, they were no more.

Didn’t see ‘em come, didn’t see ‘em go, but had some excitement while they stayed. Sorry no decent photo, plus I was too busy getting rid of them!

Over the next two weeks came the fruit flies, a well-known nuisance around the Chesapeake, for some reason. One minute we had the typical one or two, and the next minute Twins hosted many multiples of ten!  Day and night, night and day for more than a week.

Oh I did the usual tricks and what worked best was the “seduce and drown” method; a bowl of: water, cider vinegar (or red wine), pinch sugar and a few drops Dawn. Got over two dozen one time. The other effective method consisted of brute force and lightning quick accuracy. 🙂

You might be thinking, yes so what? Nothing new about flying things. But wait dear reader; I’ve saved the best for last, because it did in fact all happen in just this order.

No sooner had we bid a fond, oh a very fond farewell to the fruit flies, we then were introduced to midge flies (a comprehensive term for a variety of flying insects that maybe even the black pepper flies could belong to) at an anchorage south of Coinjock, NC. (the day we left Atlantic Yacht Basin) North Carolina has grown on me over the last few years, but this, our first night over the border caused us to question that liking; but perhaps worse, our earlier than ever timing heading south.

Without further ado, here’s the scene:

We awoke to find half of the boat plastered with these things; they preferred being out of the wind and the sun. So many that you could hear the wrrrring sound produced by 10 bazillion sets of teeny wings. ActiveCaptain reviews had warned of this possibility during certain (unlucky) times of the year and boy we sure nailed that time. A bit of research said to turn off all lights at dusk in an attempt to discourage them. Well, maybe next time. 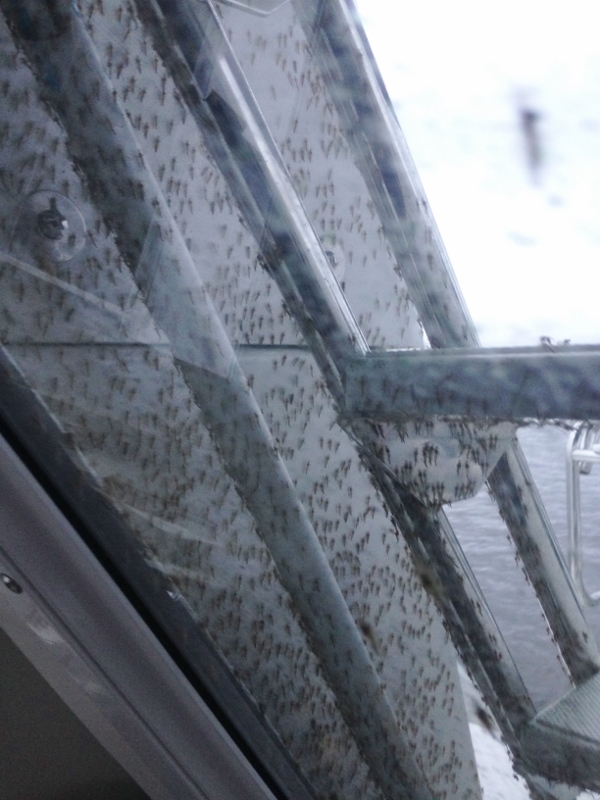 Running from the flybridge was not going to be an option right away, but after 30 minutes we’d be entering Albemarle Sound and Russ wanted to be up top for that run. Chilly, breezy and loaded with midges. I manned the inside helm while Russ tried to make the flybridge helm decent for sitting at. Not much could be done except to sit on a crappy towel and keep wishing them away. 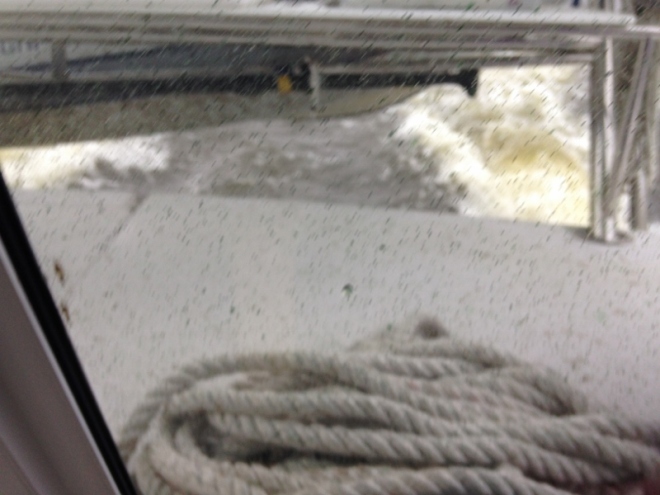 The lines we’d used at the marina still sat, guess where? Piled at the stern, providing more surface and hiding space for the midges. Once across the Sound, out came the Dewalt wet-dry vac which we plugged in, turned on the inverter and began the forever process of sucking up those critters!

It wasn’t as easy as you’d think. They scare easily and fly up (but not away) when you or the vacuum nozzle come near. Over the course of hours, during the rest of the trip into Belhaven we took turns. Look up under the T-top; they were there. Under the dinghy, in the lines at the dinghy davits, on the SUP paddle; any place that offered wind protection. 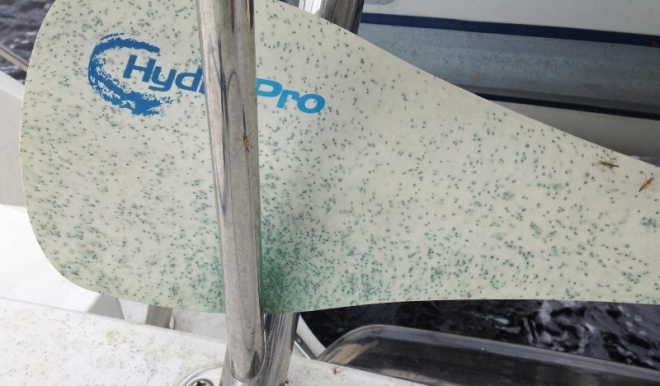 There they are! and more green goo

And the green goo residue they leave behind! Not sure what it is; your guess is as good as ours. Good news was that it all would clean up, so we read. Several others had anchored near us, as well as plenty of boats at Coinjock Marina; did we now have a shared experience?