A tad foggy that August morn, but it enhanced the experience.

In this post I will write about passing through Albany and Troy (and a lock) then ending up at the Waterford Visitor Center with a nice floating dock, power and water- watch that pressure!! I’d thought this might cover all the way up to Whitehall, NY but I’ve taken so many photos that doing it justice requires more than one post, so we’ll tackle up to Waterford for now.

Our anchorage spot between Esopus Island  (just north of Hyde Park) and the eastern shore was calm, but the trains made it not so peaceful. Up “early” then, as were two tugs pushing long barges north toward Albany. Scenery continued to delight and while not “autumn foliage” gorgeous, you couldn’t help but smile. 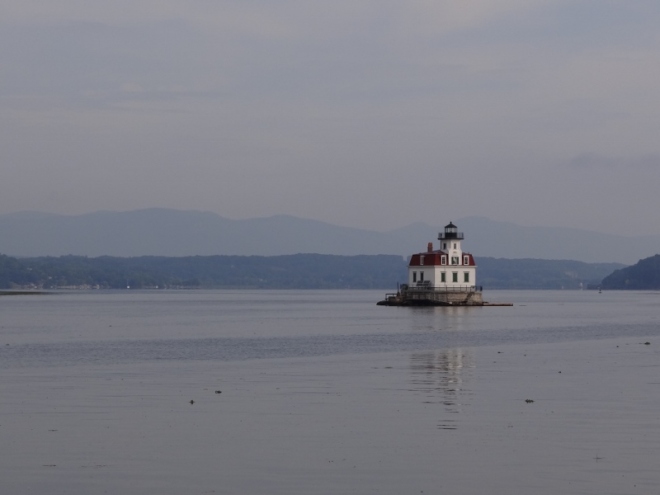 Lighthouse on the Hudson- too lazy to check location 😦

We came upon several chimney stacks, remnants of days gone by, and of course several lighthouses.

One of several old chimneys along the banks

Marinas are mostly just along the shore, some lucky enough to be tucked in slightly or with a small jetty at best. Small boat traffic seemed to depend on the area and most were locals out enjoying the ride and the very rare sandy beach anchorage.

Can you see the guy to the left? not me in a million years!

Most exciting of all, eagles began to appear frequently. Not only did they perch majestically in tree tops, we saw many in flight.

Hard to capture when we are both moving, but I tried my best. 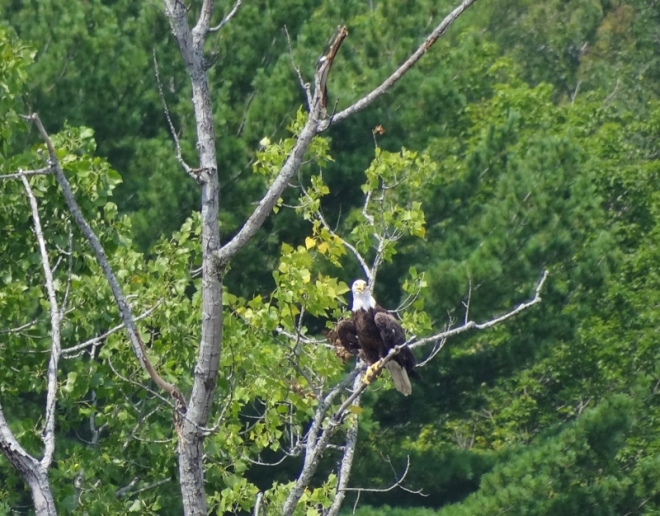 So helpful when they pose

Osprey didn’t make an appearance until further north. This may have to do with a lack of fish, and since eagles are upper-class scavengers they aren’t bothered as much by the lack of fresh, live fish.

Years ago GE spent many years dumping waste containing PCBs into the Hudson, killing off more than just the fish. Dredging to remove the infected sediment was completed last year and the River is slowly rebounding (but there’s some debate on that). Signs indicating “Catch and Release Only” are a clue to the river’s delicate condition.

Farms sprang into view on both shores

Possible cruising boats were in short supply and as we closed in on Albany, sailboats with their masts laid horizontal gave a strong clue that they were either looping or heading up to Lake Champlain. Seems dicey to me to carry your mast like that when in most cases it’s longer than your vessel.

Second use for an old canal barge- just south of Troy

The Federal Lock at Troy came at the end of our day, Aug 2. Troy, aka “the collar city”, is just a few miles south of Waterford. Now, we thought our research on the locks, bridges and places of interest was pretty thorough. Russ did most of it ahead and I caught up. We had several charts loaned to us by friends Mike and Ann, multiple online resources including blogs and official sites that provided detailed info on the locks and bridges, and of course ActiveCaptain. We even knew peeps who’d gone up to the Lake or done the Erie Canal, so we had some info from them.  Guess what? STILL NOT ENOUGH! Nothing like first hand experience to learn the ropes 🙂

Procedure is you hail the lockmaster on VHF 13 when you are “close” and he tells you how long of a wait, because the lock is never ready for you, even if it’s in the correct position for the direction you are traveling. At best, 5 minutes, worse case 20 minutes. We didn’t know it at the time, but our 20 minute wait was due to another boat heading north, locking through just before we approached. This required a wait for the water level to come up 16ft, then for it to flow out so we could enter at our lower level.

The Troy Federal Lock.  Looking at the dam/spillway makes me very nervous.

Still waiting….and wondering if we are prepared.

Too bad no Go-Pro set up for this first event. We had lines ready, gloves on and a boat hook within reach.  We didn’t know what the “grab onto” situation would be and as you can see below, it’s essentially that large metal pipe. Of course I couldn’t get the end of a line around it- see how far you have to lean over the railing? I should have used the boat hook to grab the ladder and pull the bow in, then get the line through. After three tries we managed. But then the pipes are so far apart that we could only hold on to one at mid-ship. Russ took over the holding on. By the time we got situated, the lock was already slowly filling; thankfully it was a calm event and we exited in one piece, although my nerves were sorely frayed.

You have to use your own lines in this lock; all the others have lines

A few more miles and our day would be done. So happy to see the Waterford docks, with lots of room!

Waterford- decision time. These are the concrete docks with no power, but further in are floating docks

We turned around to dock facing the way we’d be going when the time came to depart.  Peter, a single-hander and New Zealand native had just docked, and caught lines for me. He apologized for making us wait for the lock, but it wasn’t his fault we were only minutes behind him.

Reviews warned not to dock at the western end of the floating docks as turbulence from the lock could be unpleasant.

Waterford – volunteer shows how high the water rose for Irene

Dinner was thoroughly enjoyable as was hearing about Peter’s extensive cruising adventures. Dessert was the icing on the cake!

The Champlain Canal did not always exist where it does today. Originally it was shallow and narrow and essentially dug by hand. Mule or horse teams would pull the wooden canal barges along a towpath. Passing and meeting up created interesting maneuvers.

A short, less than a mile walk to the historical museum 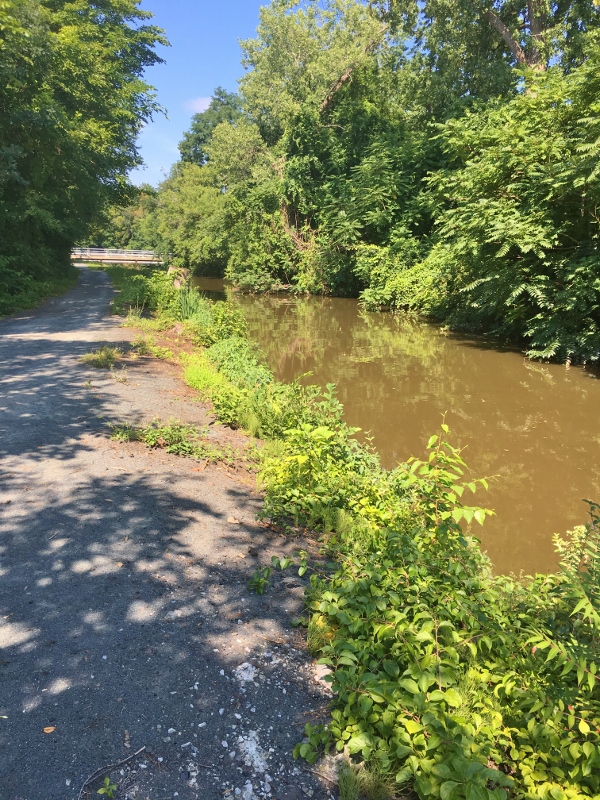 Good thing we aren’t doing the 363 mile-long Erie Canal; singing the song seems to be mandatory! 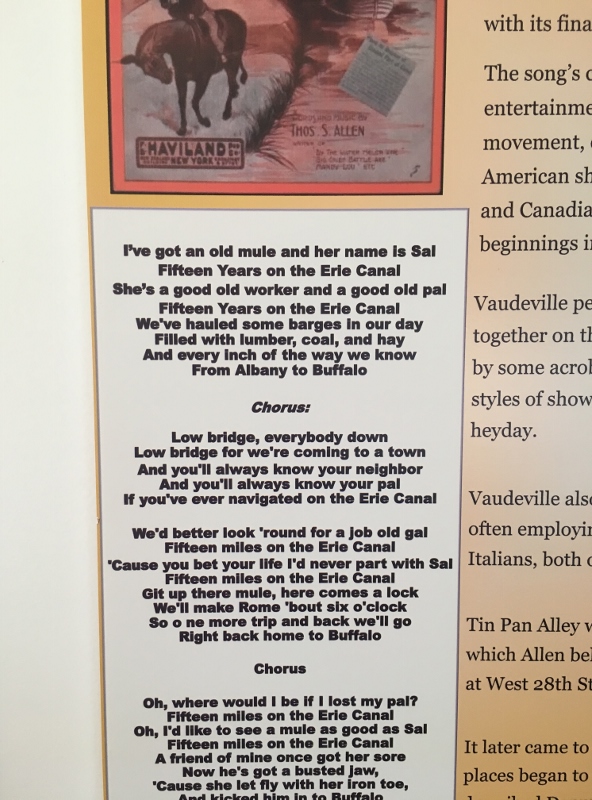 Let’s sing along to the canal song!

Do I hear you singing? Alright then, perhaps you don’t want to because you know we are cruising up the Hudson to the Champlain Canal and therefore, no song. But you may recall, the Lake has Champ- the monster of Lake Champlain. Maybe Champ has a song. 🙂