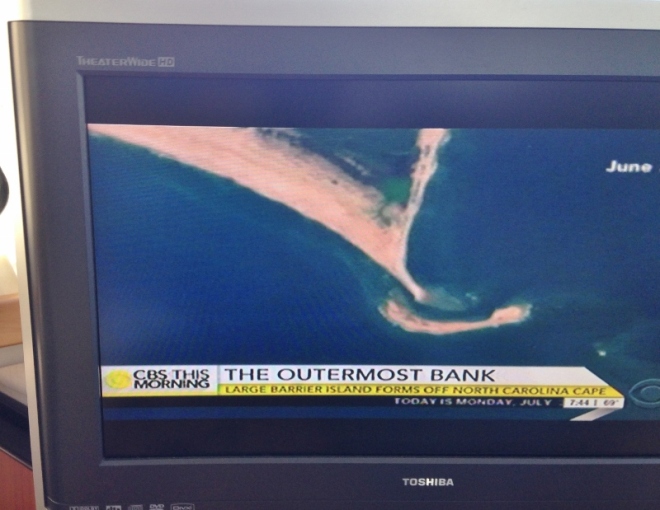 Well, at least we ate lobster, got together with friends and family, gorged on donuts, ice cream sundaes (twice!!), DQ and made a steady habit of not straying from our happy hour libation and snack.

The other 90% of our waking hours were spent getting it done, researching and purchasing needed supplies – I guess that mostly came first, and Russ was a great magician- kept pulling more to-dos out of the darn hat!

Lots of little things too along the lines of getting better organized and stowing loose items so that we didn’t have to worry about them while underway.

But you don’t want to read about this; you’d rather see proof of our hard work!

After an intense Spa treatment- looking like new. Even a rubber gasket at the bottom to keep rust from forming and off our boat

The marina Russ owned a long time ago

We managed to sneak in a dinghy tour of the marina and up the Patchoge River toward where Rte 1 crosses. Lots of memories here, especially for Russ who not only grew up in Westbrook, he owned a small marina for roughly eight years.  It’s in the above photo. See the white hulled boat on the left, Restless? Hiding behind the piling near her stern is a red phone booth. Between that and the small brown building to the right (over a couple of boats) was Rackliffe Marine, also home to Rackliffe Lock and Safe. 🙂 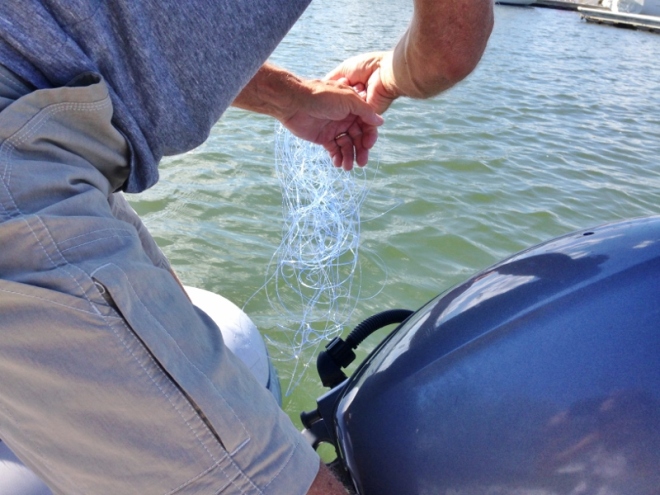 Look what we picked up. Returning from a visit to Linda & Thom’s SeaRay in the North Yard we snagged a prize. First prize of this nature.

This cutie, and what I assume are other family members, could be spotted on a regular basis. 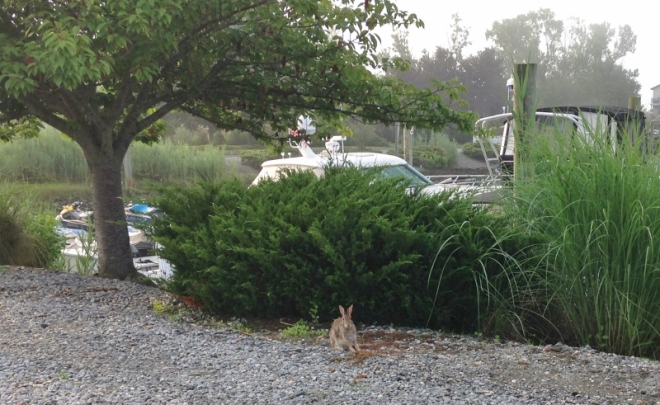 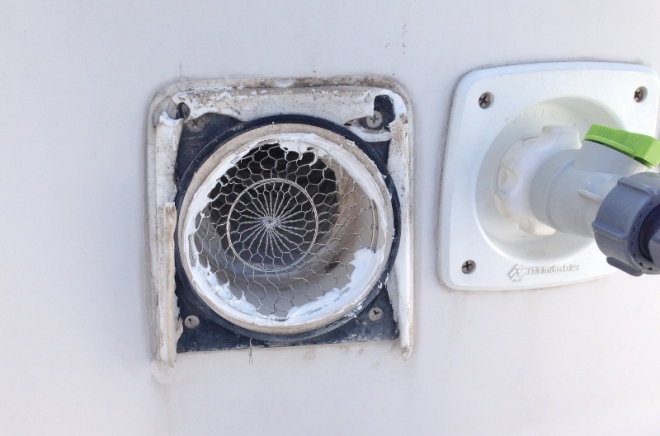 Creative use of wok strainer- was a perfect fit to keep out snakes, rodents. Break off handle and place into the opening. Seal well then replace the vent cover.

A sunny day with very little breeze was perfect for spraying 303 Protectant on our canvas and dinghy seat cover.

Three canvas tops to wash then waterproof- one at a time. Sure looked much cleaner when we finished.

This was one project left to the experts at Affordable Boat Cushions who we found online last summer. The narrow back cushion held up well and we were very satisfied with the price and quality. This summer we ordered a bottom cushion to match. Lounging will be far more pleasant now.

Our new stern bench seat cushion to match the back

Our horn had become temperamental and when we needed it, didn’t work. Soooo toss out the old and install the new, much louder horn.   Twins also received new bow lights- one green and one red, naturally. 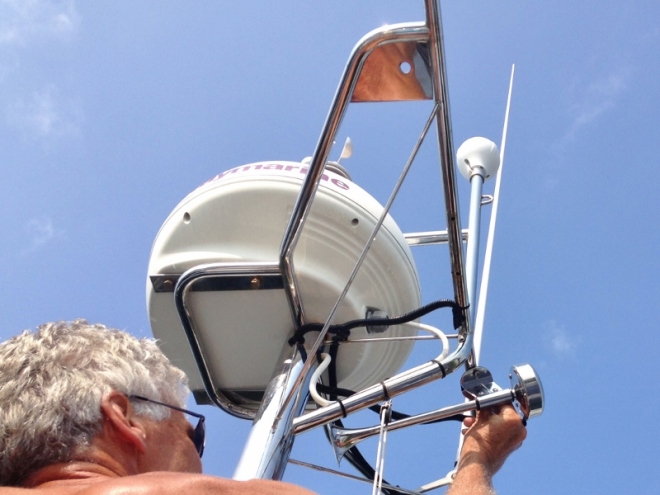 Somewhere along the line during the window treatment ordeal, I decided I wanted to own a sewing machine again. Not gonna sew curtains mind you, but Russ had mentioned a slew of small sewing jobs that we really needed to do. I also wanted to turn the one exterior front window cover into two so that the left and right windows could be covered, but leave the middle (opening) window uncovered. We planned to take it to a canvas shop in Old Saybrook that we like, but doing the job ourselves probably paid for the machine which cost less than any machine I’d ever owned.

The disintegrated top cover of the LifeSling is replaced

Our fridge has been a two-year troublesome piece of equipment. It likes frequent defrosting and is happiest if the outside temp is below 80 and not humid. Gee, I thought I was a princess! Calling in a marine refrigeration guy is unthinkable; not only because of the exorbitant cost, but in this area we’d be told, “oh we might be able to come out to take a look in a month.” Sigh. We replaced the gasket just in case that would help, but mostly for the challenge :-).  Purchased a re-charge kit but then discovered our fridge didn’t have the proper port for DIY-ers. The company took it back. The struggle continues, and we will resort to prayer if need be.

One of the last, and by far the most unpleasant, item on the to-do list was to try to sell our beloved Bonny, aka the Escape Pod. She was getting on in years- 14 to be exact- and the signs of aging were getting more costly each year. Rather than let her crumble, we thought the decent course of action was to sell her while she still had life remaining. Hopefully to someone who would love and cherish her as much (or nearly) as we did- and still do!

Would she prove to be the one thing we couldn’t sell easily? Would we find a suitable buyer? Would we sell her in time before we headed off, but not so quickly that a rental would be needed? Lady luck smiled on us once again and we almost had a bidding war.

Her new home remains in Connecticut and the owner has already written to say how much she loves her “new” Mini Cooper. Bonny will be instrumental in helping several young ladies learn to drive a stick shift, and for that I am delighted.

Our faithful escape pod is for sale

But before we let her go, we took a road trip for donuts!! The perfect last trip and look how coordinated she is with Allie’s!  Yes, they were excellent and super fresh. Worth the one hour drive.

Busier than it looks. On weekends those waiting-in-line gates are needed! 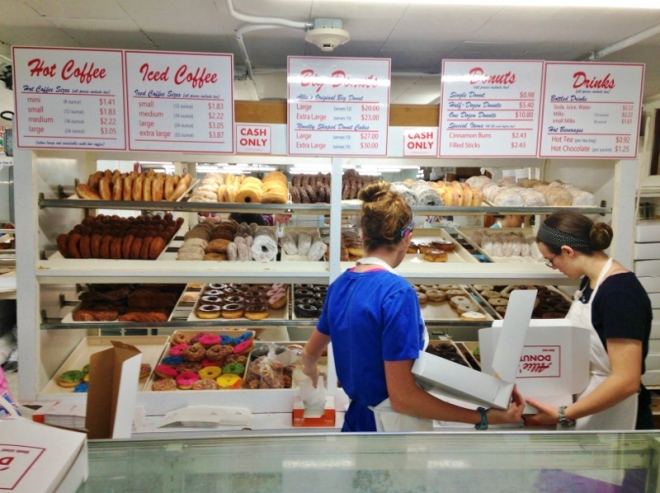 I’m sure you are just itchin’ to know the window treatment outcome. I’ll spare you the gory details of what transpired between placing the order and installation, but if we EVER do this again, we will be much better informed and prepared. But then, we thought we were.

It’s curtains for us!

A final get together with family before we bid farewell to Bonny. What better meal than pizza?

PizzaWorks before we leave. Years ago we’d all get together here on New Year’s Eve and it remains a favorite place to get together for delicious pizza.

A handful of final preparations, (a few very enjoyable for me) and we’d be off on Monday, July 31. See you up the Hudson somewhere as we venture into new waters. And locks, locks and low bridges.