A vacation from what? Living the good life? Why you ask, would we need a vacation?  But remember, we operate the opposite and while we are enjoying sandy beaches, sand bars and cruiser meet-ups, most of the country is freezing your buns off!  So come summer, it’s our turn for some unpleasantness in the form of boat projects. On the plus side we get to stay in one place (this time for 5 weeks), get together with friends and family, shop lots and do all those things we generally can’t easily do without a car.

Most of the boat projects were one-time deals that will make living aboard more pleasant, easier or safer. Routine maintenance like oil and filter changes never goes away, same for cleaning and making sure we haven’t sprung a leak someplace.  Now, sit back and enjoy a visual re-cap- (I’d already forgotten much of what we’d done!!)

Friends Cathy and Linda came for lunch. Russ is the perfect chauffeur

As usual, the big camera with great zoom came in handy for feathered friends fotos!

The osprey families were active, the young ones practicing nest building, fishing and flying every day. Had several landings on our bimini top accompanied by large stick donations. Two boats near us were heavily favored by osprey and even though the boats got used, the osprey never gave up.

From our mooring we have a great view in all directions, perfect for bird and boat watching 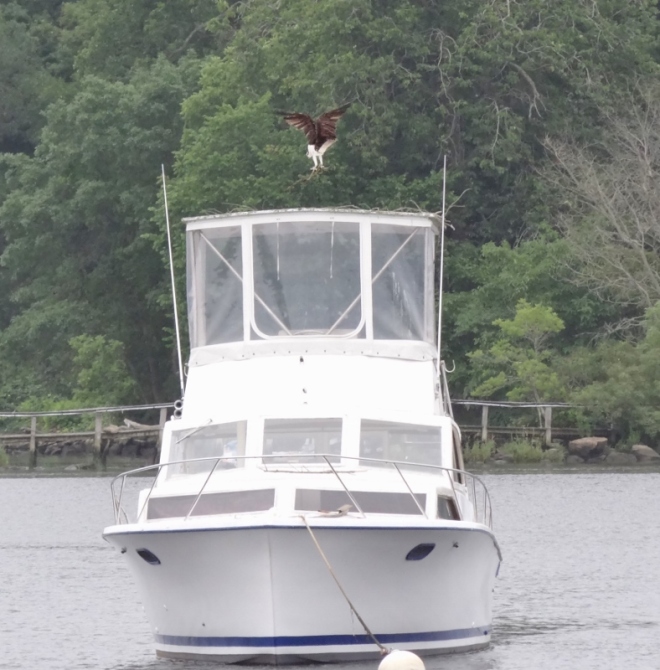 Friends were kind enough to invite us to their home for their famous home-made margaritas and dinner!! 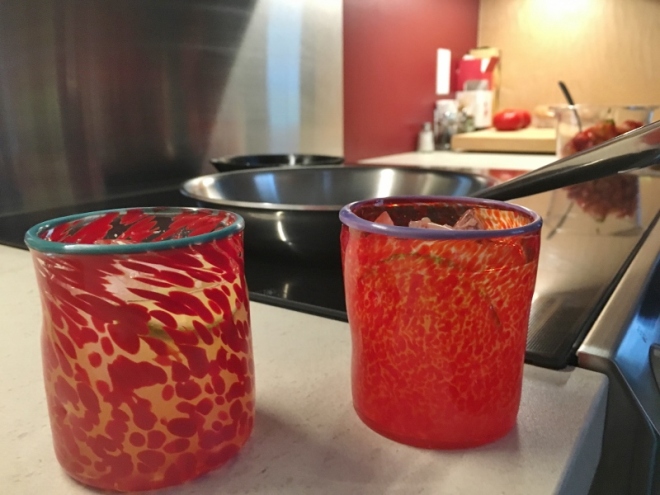 We’ve missed doing it once or twice (not easy when we only had the RV!) but our family, and Russ’s family growing up, tradition on Father’s Day was to spend a relaxing few hours (at least) in Lyme’s Hamburg Cove. No anchoring, moorings only. You can pick up a rental one, but picking up a private ball is accepted practice and if the owner comes along you move to another. Only happened to us once.

Our first raft-up in Hamburg Cove! David,Seth and Matt join us after lunch, zooming down the River from the Blue Oar. Would you believe we got lobster rolls to go? Russ enjoyed a near-perfect day. ( No Benj) 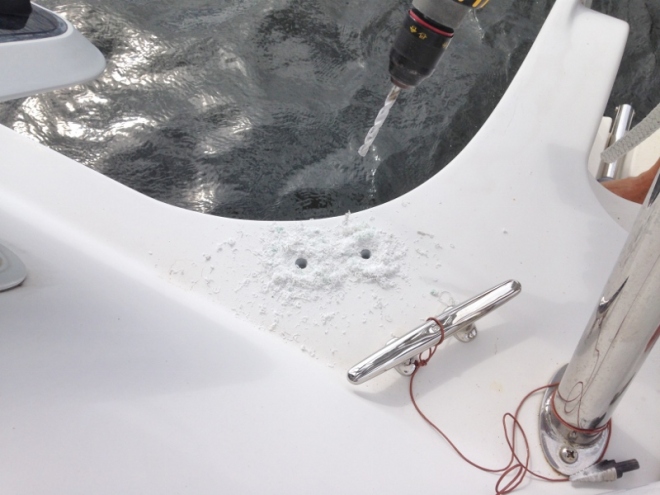 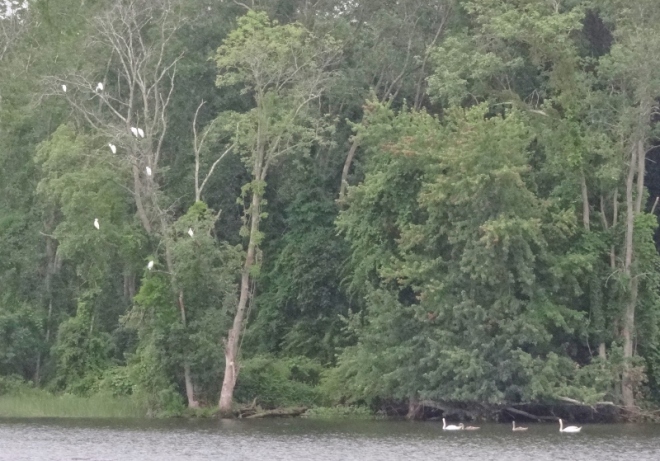 The egrets and swans sense bad weather coming. and they were right 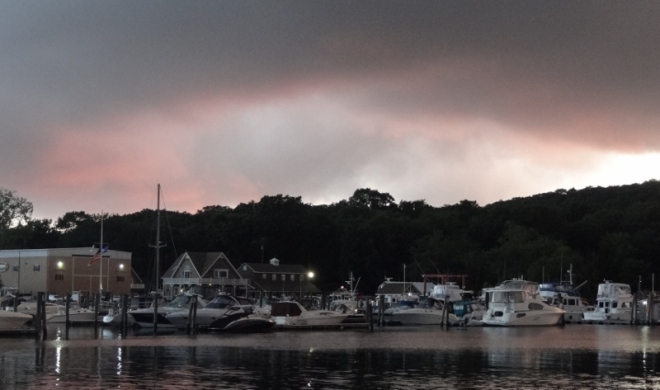 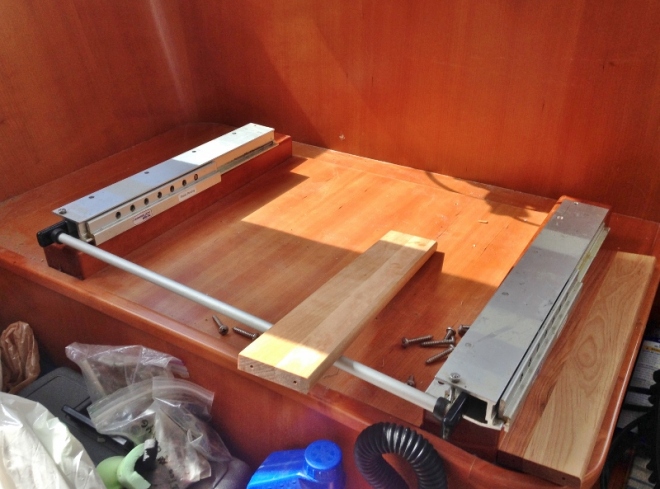 And for us, what’s a boat without some deck wetness?? Discovered during the pre-purchase survey and pooh-pooh’d by the surveyor, no way was Russ going to not deal with it. Sooooo he removed the metal anchor chute dug out much of the wetter sections and let it all bake in the sun for days. Before the next rain we filled up the spaces with West System Epoxy and replaced the anchor chute. 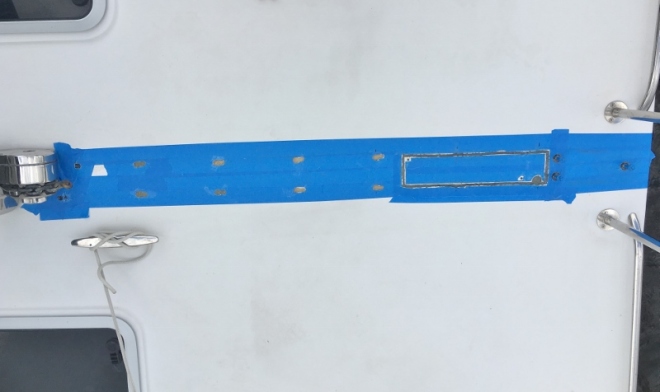 Holes & spaces filled with epoxy. Ready for tape removal and replacing the track and anchor.

The stern bench seat is a good place to sit when you want to be outside but it’s too windy for the flybridge. With only bottom seat cushions it wasn’t very comfy as the backboard was a tad hard, as you can imagine. Russ decided- ah yes another project- to move the grill. It had been placed on the left side (looking at this photo) on the stand it came with, cable ties secured it to the bench seat. One of our two propane tanks had to be next to the grill. The setup worked but it was sloppy. Russ moved the grill to the right side of the bench seat while we were at Herrington Harbor, and that seat cushion is now in storage.

This enabled us to run a propane line up and over to the propane tank locker in the flybridge so that both tanks could be properly secured and none sitting out looking messy.

One of the Herrington Harbor projects- moving grill from SB side to Port, losing most of the stand

The back cushion is only the length of the two remaining seat cushions. 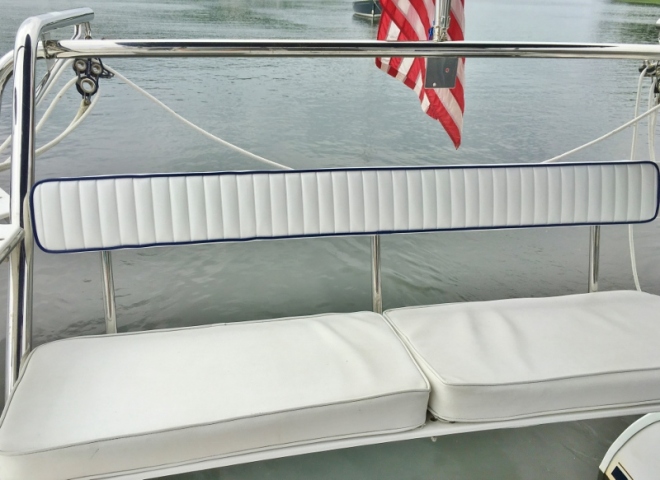 New back cushion for stern bench- easy deal from AffordableBoatCushions!

Our 25 year-old nephew recently bought a duplex in town so a visit and pizza were in order.

In back of Matt’s

He’s thinking of selling this- Ok he did!

One of the first things to tackle was the lifelines. We’d planned to remove them and send them out to be re-coated with vinyl.

You can see in the below photo, how discolored the vinyl is. Ten years will do that. But then we got to thinking that Ms Ortolan had bare lifelines, so why not on this baby?

A quick check revealed the bare wire was in great shape and all we had to do was carefully remove the vinyl, clean off the rust and put them back on. Saved a bundle of boat $$.

A few of the removed lifelines with discolored vinyl removed

Lifelines waiting their turn to be cleaned.

These folks failed to realize the current was stronger than they could paddle, especially with the blue kayak in tow.

Lunch at Lobster Landing is a must when Benj comes, not to mention we must have enjoyed these most wonderful rolls several times during our time in CT.  The place is conveniently located very near our UPS Store and storage unit. Wednesday is Senior Day- save $2.50 off the regular price. These are THE best; even the roll is special. 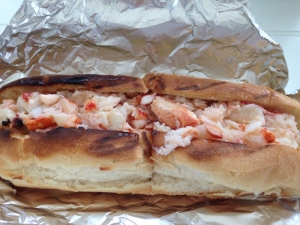 This place has a cozy spot in Clinton Harbor 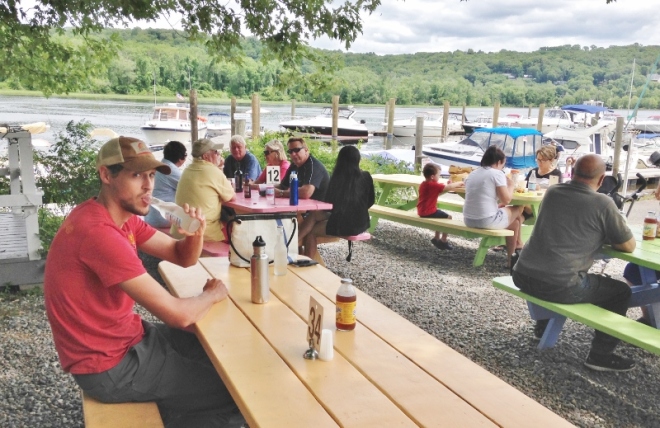 Our first visit to The Blue Oar. Another great dining spot on the water. This is on the Connecticut River.

Many of you know that Russ sold his wildly successful locksmith biz in the spring of 2010. The current owner is keeping it alive and we sometimes run into him now that he’s got a box at the same UPS store that we do. We, and Benj too, hears about RL&S truck sightings from time to time. But the best by far was the time Benj saw this truck in Middlebury, VT!!  Talk about covering a huge territory. 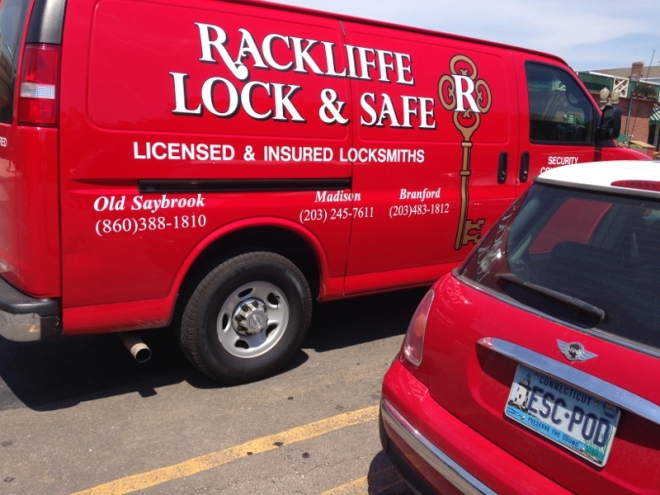 WOW- look who we meet at UPS Store! The real red heads. 🙂

We took line inventory. Think we have enough? Nah, we bought two more. Nice blue ones. 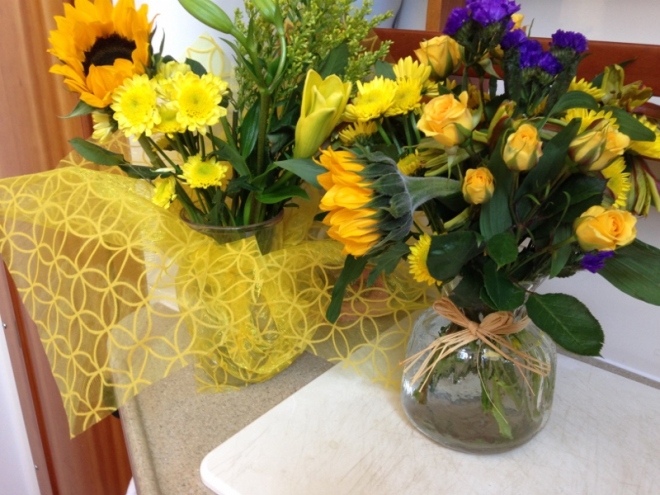 Elise, Erin and Sean brought flowers when they came to visit. How sweet was that?

We went to look at a boat. Isn’t that what boaters do? Those who wish to be on the water more do it too! Matt wanted our opinion on this one in nearby Westbrook (where Russ and Matt’s parents grew up).  Who are we to discourage safe boating? Our nephew has since decided a twin-engine cruiser is preferable and we have to agree. Maybe next summer we will be rafting up to a different boat in Hamburg Cove. 🙂

Was an easy boat to check out, but only has one outboard- otherwise in great shape

Much of what we bought for Twins was purchased on-line. But we did our share of local brick & mortar shopping. 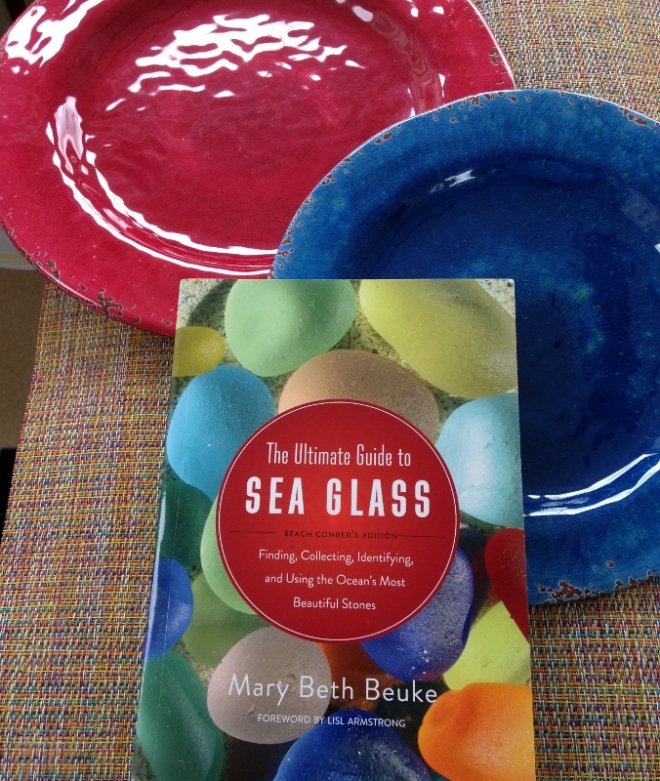 Well folks, those were the highlights! Lots more occurred but I am worn out and you are nodding off so I will close for now.

The plan was to finish by July 31 so we could head off for a few weeks to cruise the Sounds: Long Island, Block Island and Vineyard with stops at our favorite islands along the way. The Real Vacation is up next!