Multiple weather checks to the point of compulsive in an effort to plan our ability to get into Elizabeth Harbour, aka George Town, occurred with increasing frequency. Of equal importance was stopping at Black Point for coconut bread, coconut rolls, laundry and maybe meeting up with Mike and Ann on Traveling Soul, aka the other TS. Could we make that stop and then move south in time to stage for a much-desired short hop out into Exuma Sound (essentially the Atlantic Ocean) on the morning of forecasted low winds? And if that low wind window evaporated, we needed to be somewhere safe for the cold front arriving Thurs night/Friday morning.

We had two plans and they both included the same path, but we’d have a sloppy trip at times going into southerly wind and waves, as even the Bank side gets choppy. Our wishes all came true and my happy face was out in full force.
The harbor at Black Point is large enough for all the boats who want to be there and we got a spot near Rockside Laundry in the hope of being able to use the Wi-fi to Skype Anthem. As we dropped anchor (in the water, not on my foot) I heard a loud whistle and looked around to see wild waving from someone on a red and white canvased Canadian monohull ; oh it’s our old friends on s/v Persistence, who used to be sailing cat Polar Pacer, but now have a monohull. Been a long time since we’d seen them, but two years ago we saw their old cat with her new owners in George Town.
Black Point looked good; Lorraine’s Café had expanded and now provided native Bahamian buffet lunch to tourists brought in by fast 30-seater power cat, the laundry was still the same price and Ida was happy to see everyone and still doing haircuts. I’d special ordered coconut rolls Sunday and they were ready in all their glorious deliciousness; some to share and some to devour.
Hey, look! Another PDQ34 is coming in!! Miss Agnes– red trim and of course I waved. Happy hour was a long-awaited reunion with  m/v Traveling Soul, aka Empress Spot and her crew. We’d kept in touch so it didn’t seem like quite so long – Thanksgiving!- since we’d last seem them. Then again, they do travel. Six of us gathered for dinner at DeShamon where the entrée of choice was boiled (poached really) grouper. Delicious and generous portion accompanied by peas and rice, slaw and baked mac & cheese. A couple of rum punches rounded out a decent Bahamian meal.
Tuesday the journey south continued, with arrival in George Town on Thursday looking more likely. We didn’t exactly travel far but it was another creaky trip to a spot we like at the southern end of Big Farmers Cay.
Wednesday took us out into the dangerously shallow “inside route”, followed only by shallow draft vessels such as catamarans and a few others willing to take the chance. Yep, that’s us brave and daring…did we undergo personality changes? No way, but my write-up sounds exciting doesn’t it? Much of it is luck and we had that today; the tide was rising and we’d be passing through the shallow sections close to high tide, so we’d have at least an extra 2 ½ ft over the charted MLW depths.
Between Darby and the West Pimlicos the depth sounder gave us the lowest reading of that entire stretch; just shy of 8ft. Explorer charts are the best and haven’t failed us yet, even though depths can change over the years as the sand shifts, thanks to storms and an often cranky Mother Nature.

Looking back as we go past the West Pimlicos

Our day ended at Barreterre which connects to another island by a bridge and that island connects by bridge to Great Exuma. Bridges are scarce in the Bahamas. The weather Thursday would determine our next move, or no move. A mild cold front was due in and we take no front for granted, because then the wind will blows out of the west…- have I mentioned that’s not a good thing?  The Exuma chain offers plenty of anchorages of all shapes and sizes but precious few offer protection from winds out of the SW- W- NW. Barreterre is one of them and if we couldn’t get to George Town then we’d be perfectly safe staying put. 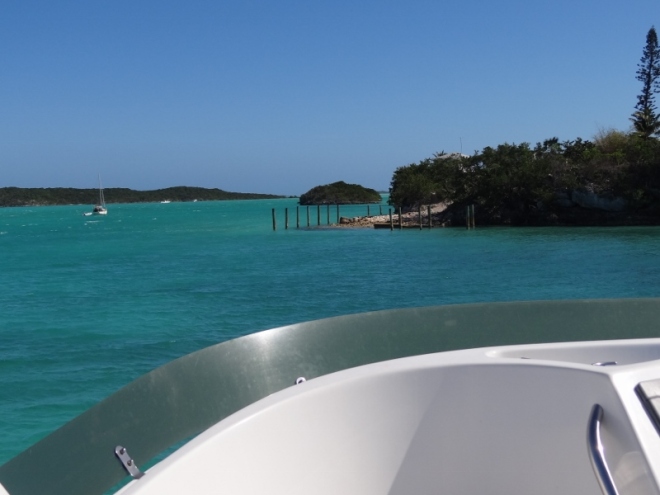 The day’s trip had been windier than we would prefer but about 30mins after we anchored the wind backed down and over the next few hours we watched several boats enter Rat Cay Cut, heading north. All night the wind behaved and we awoke to 5kts out of south. (we don’t have a means to know the direction for sure, but our flags provide a reasonable clue and when sailboats are close enough we look at the wind instrument on their mast top). This was better than hoped for and after breakfast we raised that shiny anchor and that Maggi chain and took off for Rat Cay Cut. The cut faces NNW and with wind out of the south, it was smooth like we’ve never seen any Bahamas cut. 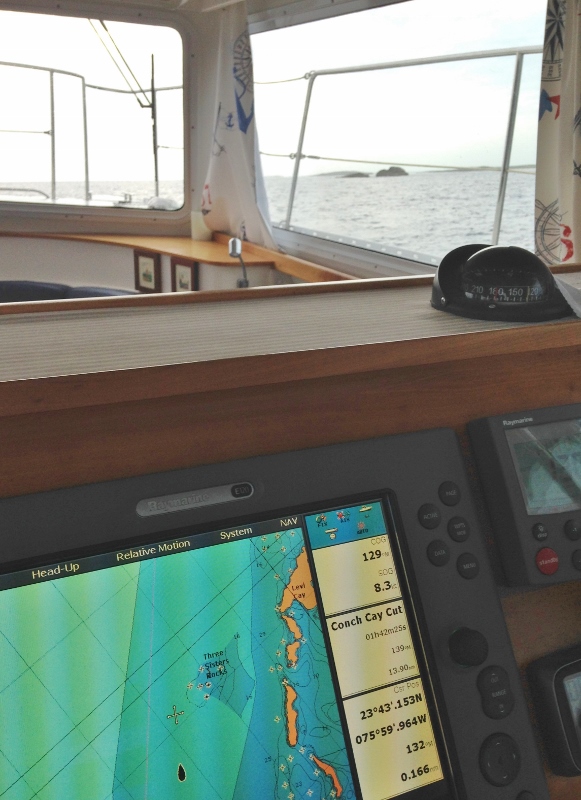 The small trio of rocks are Three Sisters which we passed on our way to Elizabeth Harbour. On the chart plotter you can see us (the black boat shaped thing) and the charted trio of rocks.

Twin Sisters purred her happy song and her crew could not have been more thrilled. The Sound, which I mean is really the Atlantic Ocean except for Eleuthera, Cat and Conception standing in the way, offered up gentle swells that diminished as we proceeded south. Cut to cut, the distance is 18nm.
The day’s total mileage was 26nm; in just under 3 hours Twins sat happily anchored at February Point. This spot is often called the Litter Box. Get it? But at least half the boats are not cats, so there. The route in from the harbor begins at Kidd Cove; it’s not a marked route, you just go where the chart indicates the deepest water. At high tide you could have as little as six feet in some spots, so many boats could manage that, but when anchored the tide drops two feet and that’s what keeps most boats out.

In five feet of calm water you get this delightful but eerie view.

The other thing that keeps many away is that this spot is almost as secluded as RedShanks, and not near the happenings on Volleyball Beach. But since the route is shallow the dinghy ride in to town is better (drier and not as bouncy) than crossing the harbor and shorter because we can zoom right along.  Now…. for obtaining produce and finding our friend Cort who is building a beach house on the moon – – ok maybe not quite that far, but on a small island is almost as challenging. 🙂