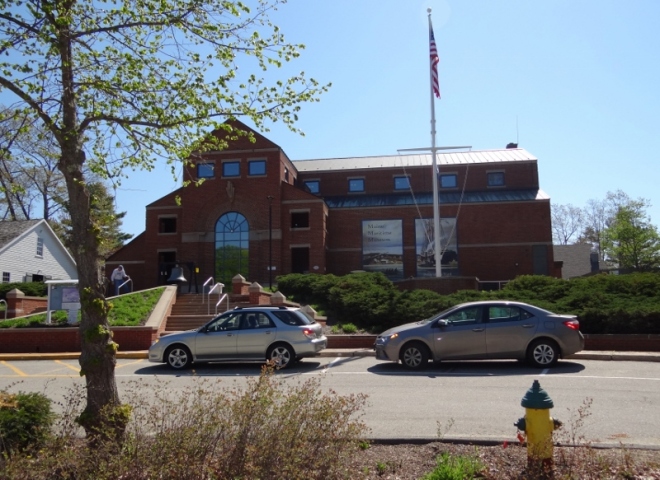 In direct contrast to much of Florida, Maine does not have a Walgreens or CVS on every corner. Bet that doesn’t stop Maine folk from being healthy and happy! But allergy med refill time was upon us and the nearest Walgreens sat 40 mins south in Bath. Bath sits on the Kennebec River and is home to Bath Iron Works (BIW), The Maine Maritime Museum, Chocolate Church and a slew of tempting shops, galleries and eateries.

Bath Iron Works’ skilled workers build and repair US Navy warships and we could see a fair amount of work in progress as we drove past. 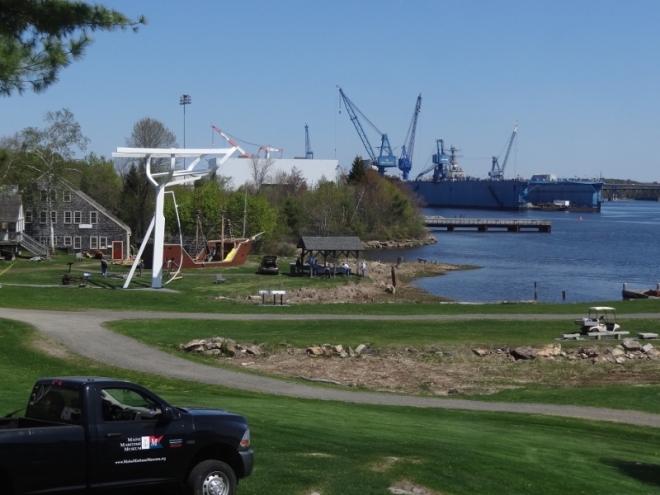 Our destination though was…. Can you guess?   The Maine Maritime Museum! A cross between a smaller version of Mystic Seaport and Maryland’s Chesapeake Bay Maritime Museum, the MMM provides an affordable way to experience Bath’s connection to the sea. We learned about shipbuilding, the sea trade, lobstering and the dangers (and thrills) of sea life through exhibits, displays, models and paintings.

An amazing accomplishment: carved interlocked “chain” from a single piece of wood

The grounds contain buildings with permanent and changing exhibits, a snack bar, kid’s pirate play ship and human size lobster trap, docks with tour boats, a pier for visiting ships and a full-sized evocation of the Schooner Wyoming. We estimate the museum covers 8-10 acres. During the 1800s, 3 shipyards occupied these acres; one of them built and launched the largest wooden sailing vessel in the U.S., the Wyoming. Amazing how ships could be designed and built from the ground up, starting with, “let’s get those local trees felled and brought in.” 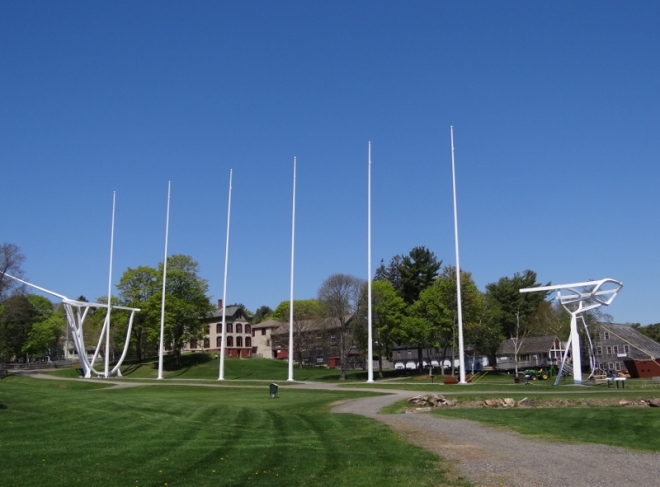 to this, honoring the Wyoming.

A precursor to the kayak? the WHYNYMS

The museum has a reference library upstairs in their main building and it is open on Tuesdays and Thursdays, or by appointment. Today was Thursday so Russ wanted to see what might be dug up on the schooner Ortolan, our boat’s namesake. If you haven’t seen the teeny post way back in 2009 about how we named our boat, click here. Well, we got a hit right off; two Ortolan names came up and one just HAD to be her. The dates and her size fit perfectly with the info we had, but no owner, master or captain’s name was Rackleff (just one of many versions), so that was puzzling.

From the various records and genealogy data we have or found, we are certain that the two-masted schooner, Ortolan, belonged to Captain William Rackliff who sailed her with his daughter, son William E. and seven others aboard from Portland, ME to San Francisco, CA.

Cap’n William made his living involved in the vast, varied and difficult Maine fishing industry. Seems he, like so many in the mid-late 1800s, felt the call of “the west”. The voyage began in late 1849 (why the rush to head out with winter coming?). Captain and crew survived a broken mast, being chased by pirates 🙂 and stormy seas around Cape Horn, finally arriving in San Francisco on August 5, 1850. They hung out doing whatever intrepid voyagers did back then, for two months, before sailing north to southern Oregon’s Umpqua River. There they (not sure if the un-named others got off in SF or continued) crossed the bar to sail Ortolan up to the trading center of Scottsburg where they (assuming we are talking Rackleff) settled into farming.

In 1850, Captain Rackleff purchased land, began building a home and sent for his wife and young son who arrived in San Francisco via the Isthmus of Panama. The family was industrious; their Oregon legacy long, their progeny many, their ship building continuous and farming didn’t last but eight years before William, being a seafaring man, built a schooner Twin Sisters and with her began trading and operated a trading post.

So what happened to Ortolan? Apparently the Captain sold her (proof that he owned her and was just not chartering her) in 1852 which was some time after Mary arrived because Ortolan carried her from San Francisco to Oregon. William then purchased a pack of mules to carry supplies; one way only because he sold them soon after. Digging a bit further Russ read an 1860 NY Times tidbit that said a schooner Ortolan, from San Francisco returned from a long-distance unsuccessful gold prospecting trip; “the soil was brilliant with mica, which accounted for the marvelous reports.”