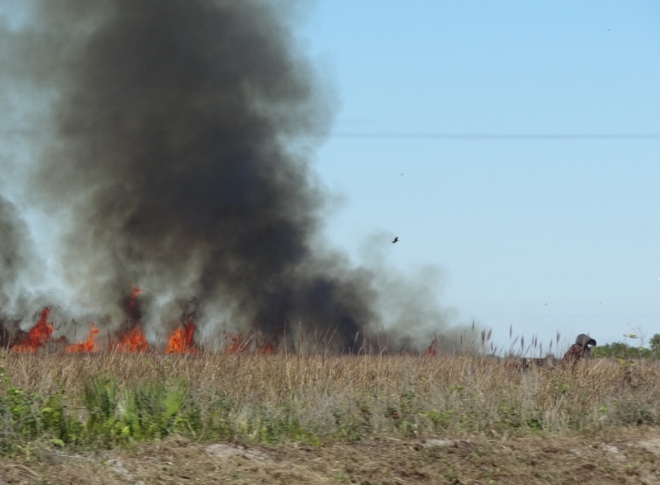 RX fire burns in a field

The 81 mile trip from Skunkape HQ in Ochopee to The Glades RV Resort in Moore Haven was my kind of trip; short, easy roads through wide open spaces, no highways and no mistakes- we are getting better at this. We always check the route on our Garmin GPS (Missy), Google Maps on the iPhone and on the spiral bound Rand McNally Deluxe Motor Carriers’ 2015 Road Atlas; at least the day before.

The Garmin can calculate in either car or RV mode and when in RV mode Missy just loves to take us right to a major highway and forget those other scenic routes. So we have begun using car mode, comparing to the all-knowing Google Maps and double checking to the atlas. As long as the roads are highlighted orange, meaning approved for vehicles with STAA- authorized dimensions, we are golden. STAA is the 1982 Surface Transportation Assistance Act that, among other things, established weight and size limits for trucks, etc. So if the road is good for them, it’s good for us and that includes underpass heights too.

Still seeing oodles of birds along the road edges thanks to the frequent gullies or tiny canals that run parallel to the roads. Bird heaven.

Yes another osprey; I liked the background

Saw large (tiny by Texas standards) cattle fields and I’m pretty sure cattle egrets were hanging around too.  When we stopped the car and I got out, every single cow turned and looked (just like this one!) with mild interest and a nice pose, then resumed cow activity when we drove off.

I’m sure someone knows what breed this is

Our home for four nights was almost in the middle of nowhere, but you could drive east or west on Rte 80 (we did both) and get to stores, gas stations and such. Every new place – and for us they are all new places- offers a bit of mystery and some level of challenge.  We often check Google Earth to see where to turn in; avoiding an unplanned de-coupling is paramount since backing up with Bonny attached is verboten. The check-in process varies and I’m learning ask the important questions, such as where are the site numbers placed.  Some places lead you to your site but others, such as The Glades, give you a site map and verbal instructions. Always seems simple when I’m standing in the office. Follow the main road in all the way to the tiny marina, turn right and site 10 is the 4th on the left. The site number will be on the short black lamp-post.

Our site. Note the overhanging branches, the small shed to our right and cactus hiding the lamp-post

Site numbers for 9 and 10 were well hidden and our permanent neighbor in #11 had encroached noticeably onto our site and when they saw us, hurried to move extra tables and chairs that would have been mowed down during the perfectly- executed backing in process. No room to move over to allow the awning to extend ( but that was fine since the wind was up most of the time) and no room to raise the antenna with the branches right there.  No TV all winter so why start now?

Red-bellied woodpecker in that old tree

The old tree proved to be visited  often by a pair of woodpeckers who vocally announced their presence. They had me well-trained just like Pavlov’s dumb dog.

A few miles west on Rte 80 is the Ortona Lock, one of several along the Caloosahatchee Canal that links Lake Okeechobee to Ft Myers. The lock is run by the Core of Engineers and includes a 30 site RV park that I couldn’t get into trying two months earlier. All the sites have a view and all are concrete and gravel with a covered picnic table. Full hook-ups too. 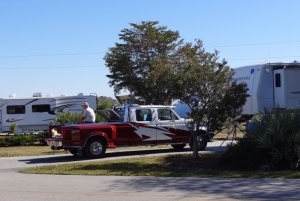 I met Wade, a COE volunteer and we had a nice chat 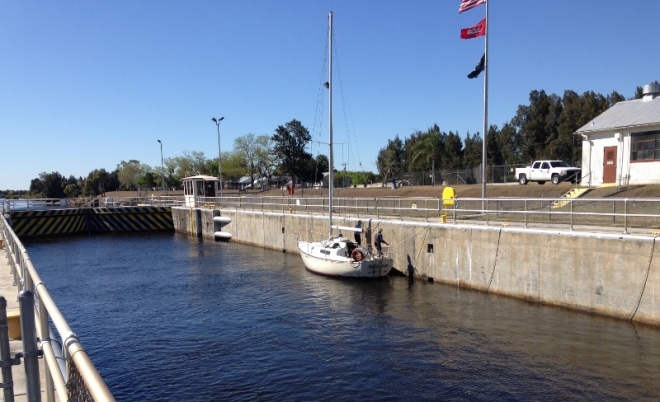 Sailboat in Ortona Lock- a COE site with 30 RV sites

The water drops eight feet in the lock for those heading west. While I was bird watching and chatting with new buddy Wade, Russ stood by the lock while the sailboat crew tried mightily to get themselves attached using lines already hanging over the concrete.

Successful exit from the lock

We survived, but don’t have the T-shirt, the coldest Florida night in three years while here in Moore Haven. Ran two electric heaters all night on medium to keep the inside temp at 65 while the outside dropped to 29. We could run propane heat but it’s noisy and the rig electric heat (A/C reverse cycle) won’t work well in temps much below mid-forties and it’s noisy too.

Deep River, CT (if the power ever gets restored after Tropical Storm Isaias)