Back in December we’d shortened our stay in Florida City so we could make two additional stops before Melbourne. Trail Lakes campground was right on the Tamiami Trail (aka Rte41) in Ochopee, FL near the western boundary of the Big Cypress Preserve and surely a strange land stood before us when we pulled in. 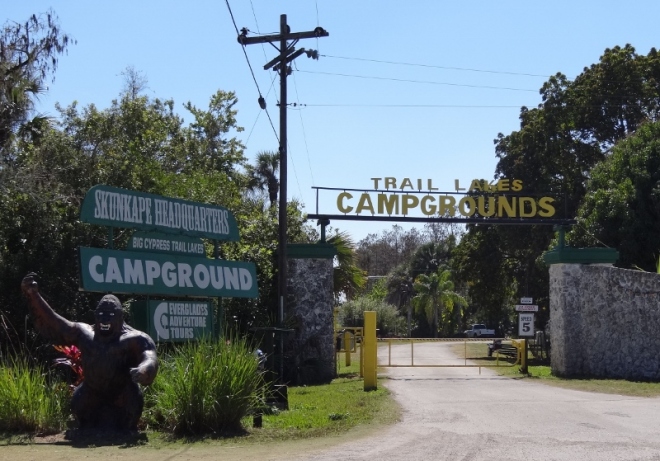 What kind of place did I book us into?

Our site is best described as pull-alongside, the pond that is. The clump of grass blocks the sign that indicates Wi-Fi and it did work with our booster. One brisk 48 degree morning we enjoyed this scene (taken from a side window).

During the day when we were around (not much) I’d sit in a chaise, read and keep eyes and ears open for flitting feathered friends. The bare tree across the pond gave me the best chance for a clear shot. 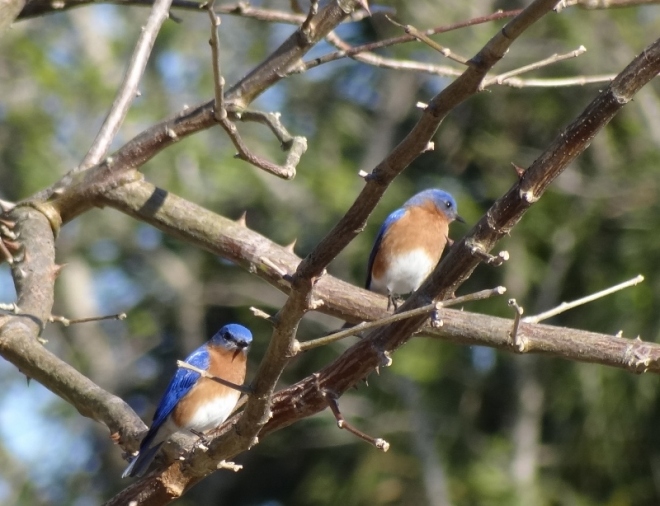 Eastern Bluebirds- not commonly seen in these parts

From this campground we ended up exploring mostly west into the Fakahatchee Strand Preserve, the Ten Thousand Islands Refuge and down CR29 to Everglades City and Chokoloskee at the road’s end. Don’t you love these Indian-based names? SR/CR 29 forms the eastern boundary of Big Cypress Nat’l Preserve with Tamiami Trail running west to east through the lower third. Everywhere you drive you see wading birds, gators and birds of prey. Rte 41 is filled with places to stop and enjoy whatever floats your boat; sightseeing, adventure, hiking, dining but with the Tamiami Canal running right next to the road many cars would just pull over to take in the scene.

In 1974 Congress created BCNP to protect the fresh water’s natural flow from the Big Cypress Swamp into the Everglades and Ten Thousand Islands. The swamp’s fresh water feeds a mosaic of five distinct habitats in its 729,000 acres: hardwood hammocks, pinelands, prairies, cypress swamps and estuaries. In creating the Preserve, Congress honored the occupancy and customs of the Miccosukee and Seminole peoples. Villages exist in the Preserve today as they have for generations; but we’d have to save a visit for another time.

After a stop at the BCP Welcome Center where we take in a wonderful video, check out the displays and wildlife out back, we decide to drive Jane’s Scenic Drive. 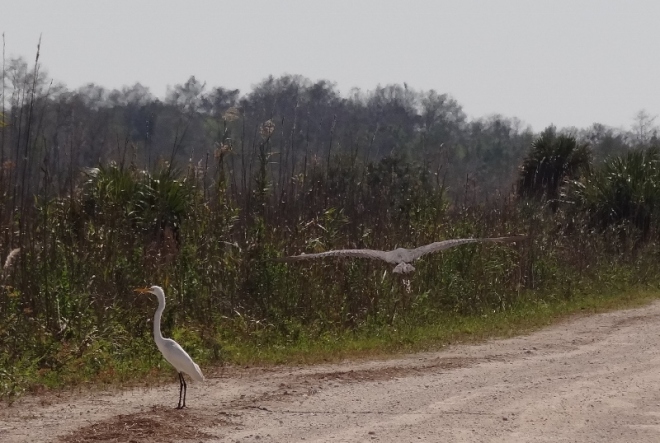 A great egret and great blue heron capture our attention 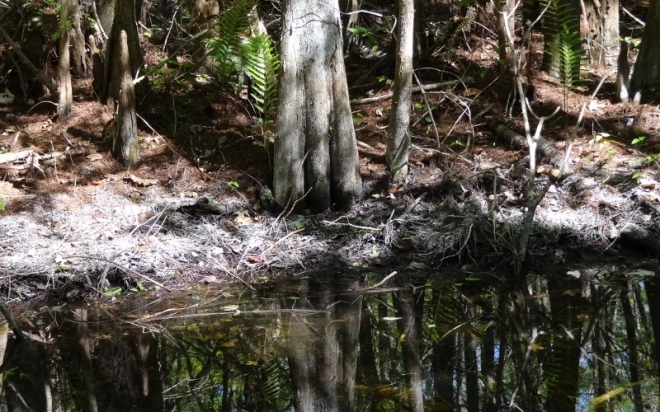 Not sure what the white stuff is- some sort of mold? 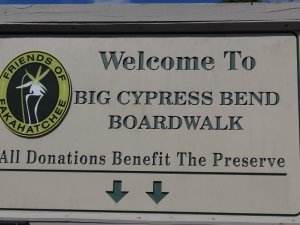 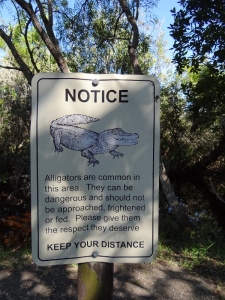 This sign appears at the start of the trail 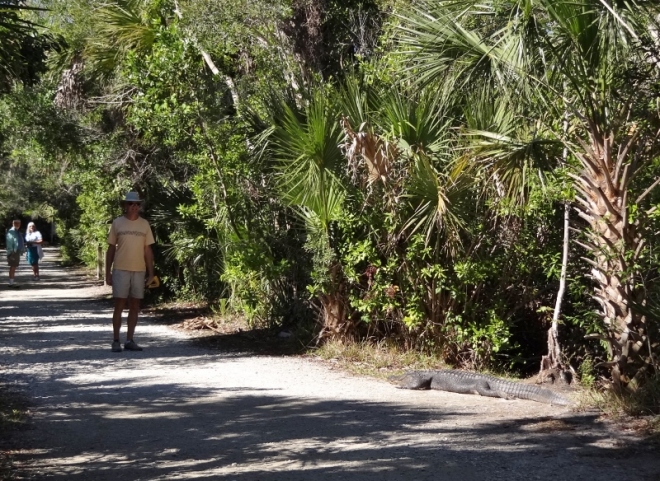 The Big Cypress Bend (I keep typing j instead of the d in Bend) trail is an interpretive one; signs are posted along the way identifying plant life, birds that could be seen etc. No sign was posted for this. Someone heard from someone else what to look for and the word gets passed along. This nest was quite some distance and many small branches and leaves blocked the view, especially from certain angles. We could sort of see a head pop up – oh it’s a great horned owl we heard and I said Ok but that’s a baby not the adult. So we managed to get a good shot and went happily on our way. Not until I loaded the photos onto the laptop did we see the bonus; that’s mama on the left and baby is in the nest. No one looking at the time realized the adult was sitting on the edge of the nest. 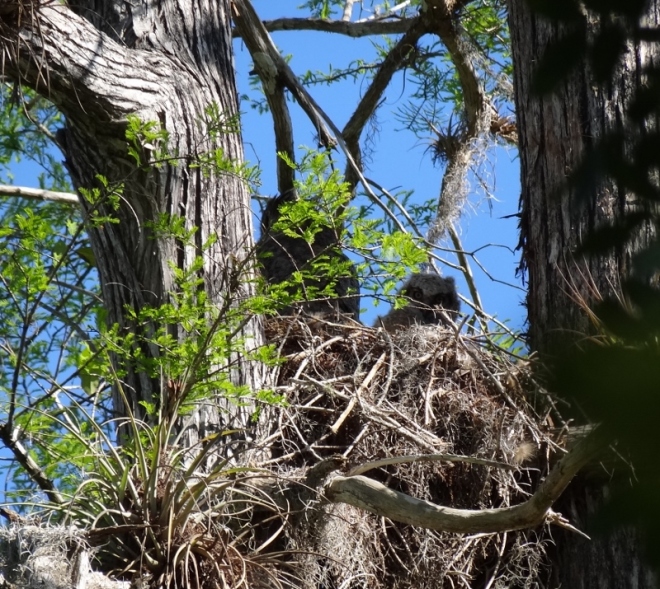 We liked this walk so much that we came back the next day; nesting birds are changeable we learned. This time we clearly see mama but not so much her chick. Our binoculars made the rounds as most don’t have them and seeing the owls was a big deal. 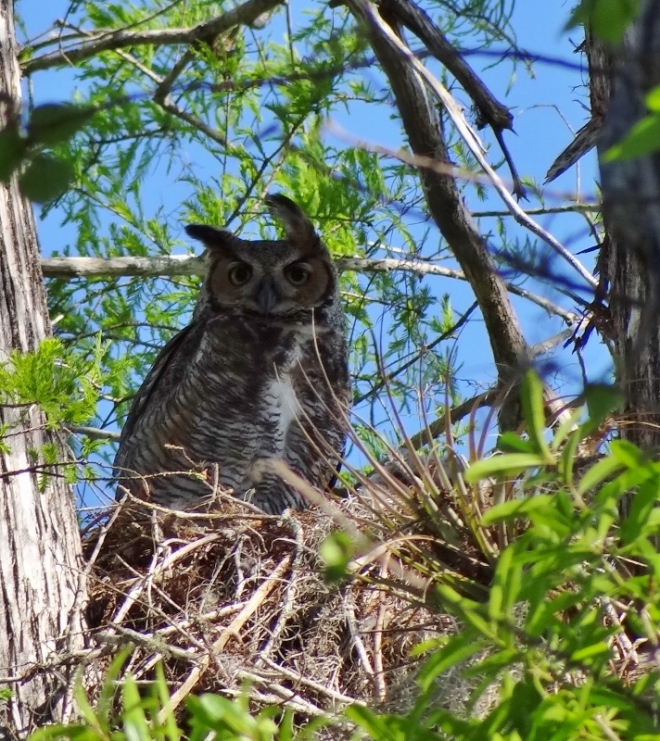 Who who is this! 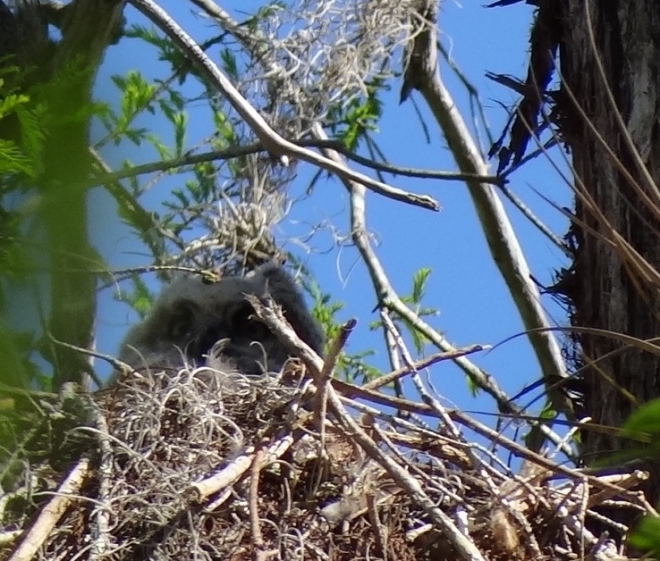 A short ways down the boardwalk is a sign pointing out an eagle nest; the owners have been returning for 22 years. A tripod spot is even available. I did get a shot of mom or dad in the nest with jr, but it wasn’t well focused. The below shot we got on the return visit and even got to see the eagle in flight; assuredly gone hunting. 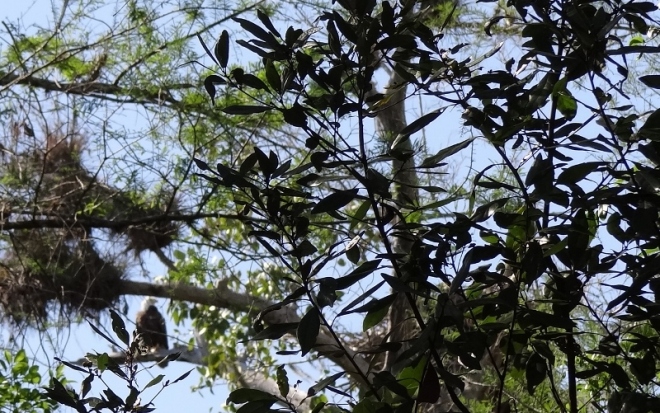 One of the adults sits on a branch; the nest is to the right 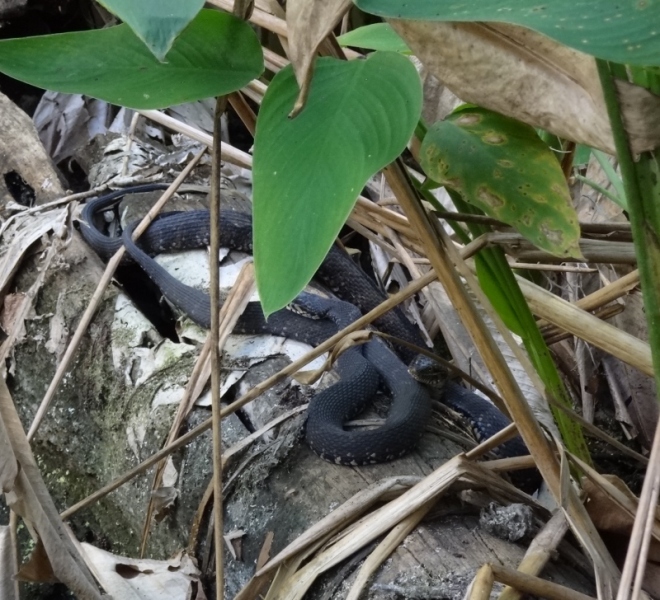 The only snakes we saw, not counting the deceased one in the road

Our day ended at the Marsh Trail, about a 30 minute drive west from our campground, on Rte 41 in the Ten Thousand Islands Nat’l Wildlife Refuge. At the northern  border with no visibility into the islands, but with a large multi-level viewing platform that was perfectly situated. A side note- during the video we watched earlier Panther Key (one of the 10,000) got a mention and we smiled- we know that place: 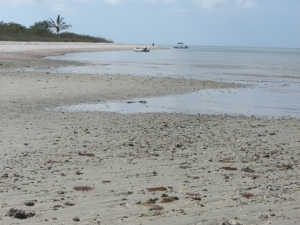 Panther Key- a stop in Feb 2011 aboard Ortolan 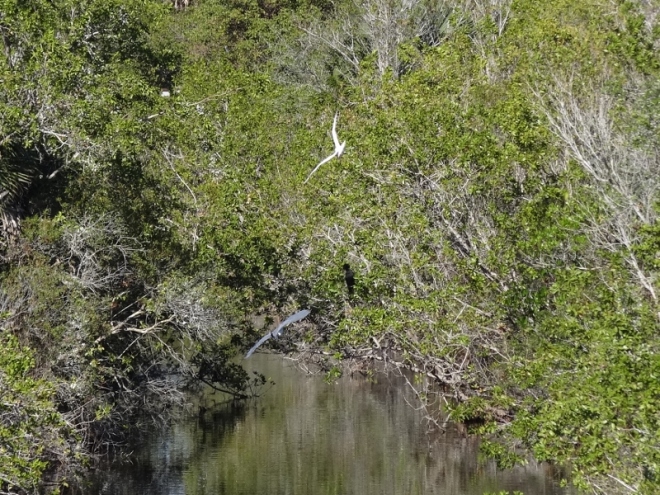 Egret and heron in flight. I am always thrilled to get an action shot 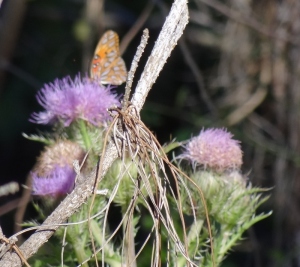 The large viewing platform sat about one-third of the way down the 1.2 mile path. Of couple other spots held promise but none this good. On our way back we checked out the view again and Russ went up ahead of me. As I came up the steps he called me over. This beautiful egret was the subject of a man with a serious camera; long fat lens, camo color, tripod and remote shutter. The owner invited me to take a look; yes I can see the difference between that and mine- like a million miles!! 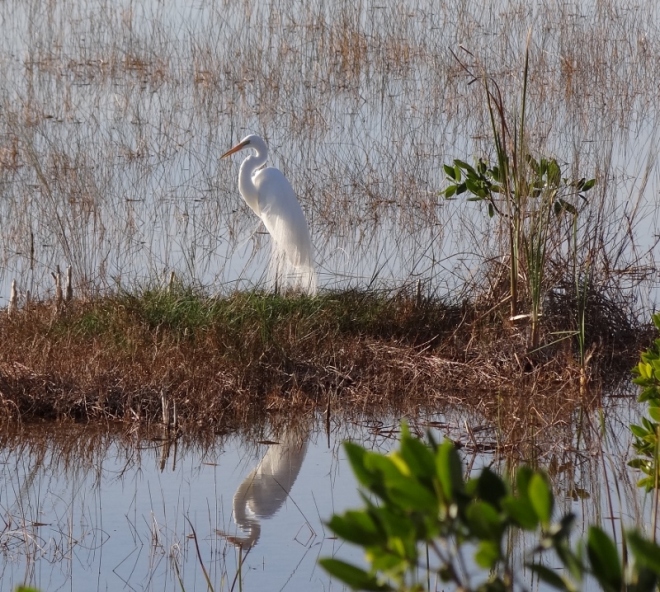 This great egret was a photographer’s dream

We got to talking; I asked what he did with his photos. Only 10 mins earlier Russ and I were discussing that; who were these people with the super serious cameras and what did they do with the pictures? Personal use? Commercial?

Rick was very obliging as befits a southern gentleman and he gave me his name, FB and other contact info. Said when we were near Charleston (we will be) to contact him and if he could he’d take us to a great spot for fantastic birding. Told us some other good places in Florida and we shared about our owl find.

I snapped this after he’d run across the path to check on a possible better  bird. 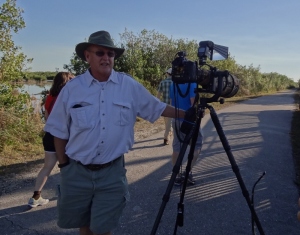 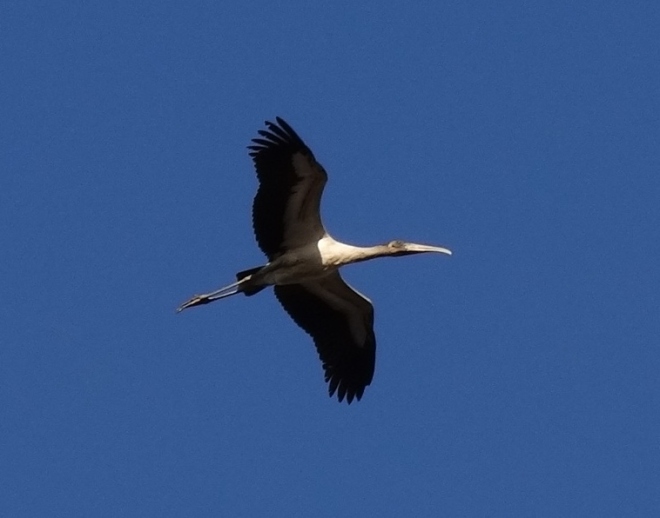 My parting shot- a wood stork in flight