Looking further in the harbor toward all the touristy stuff

Boothbay Harbor was home port from Wed 8/20 until 9am Monday morning and we thoroughly enjoyed every minute. Well, maybe not the few seconds when the osprey landed on our Garmin wind indicator (visions of three years ago), unintentionally pulling it off.

The thing landed with a smack and I jumped, not knowing the osprey was up there. Seems like the local couple has a new family and they’ve been out and about, chattering like crazy and landing on high perches, looking for their next meal.
We’d run out of fruit, so before scurvy could claim us we high-tailed it about a mile to the local Hannaford’s where we just happened to notice they sell not only beer and wine but hard liquor too. Ummm, doesn’t rum count as a fruit? Ships, pirates, rum and all that.
We anchored off Mill Point in 35ft at high water with a 9 ft tide range. I think we managed to put out approx. 4:1 scope which was sufficient for the low winds we were blessed with. Don’t think we ever saw more than 11kts and only briefly. Nice.

A pretty lady sails by

How great then to zoom down a mile to Burnt Island via Ms Bunting to check out the lighthouse and sea glass laden beaches. 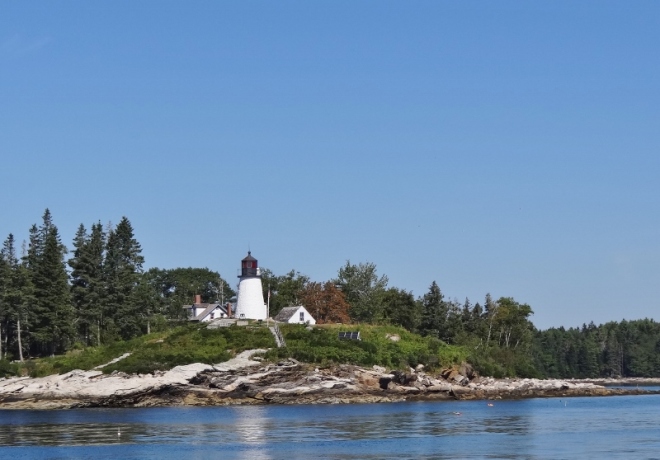 Many moons ago Algonquin tribes burned the island’s forest to allow them to farm and raise sheep, protected from wildlife on the mainland which sits close enough to row to. 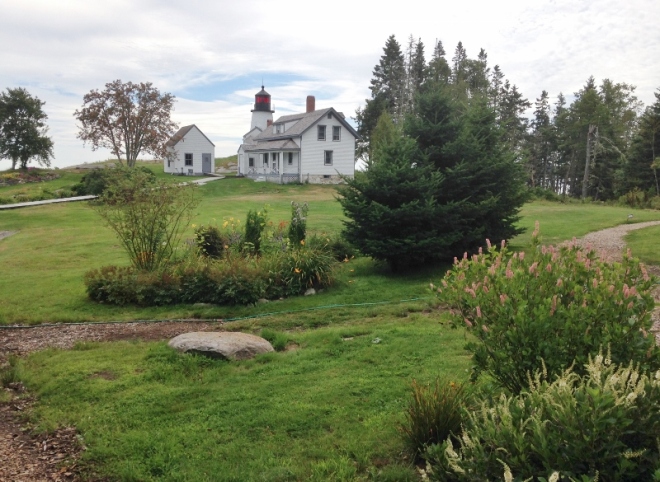 Boothbay Harbor welcomes local and far off visitors in abundance but this seems to be on the downside of the tourist season so we never had trouble doing anything we wanted. The harbor is active, with pleasure boats, lobster boats, tour boats, sailing schooners all happily sharing space. We watched them come and go. We never had more than 3 boats total anchored off the point which sits about ¼ mile from the town dock. The tour boat Novelty would stop around 5pm to pick up one of two pot floats they have to show the curious customers how it all works and they always had one lobster for show and tell. Sure, why not have a lobster pot in the middle of the anchorage just to add to the fun?

The slippery harbor seals proved elusive still but I kept an eye out and one hand on the camera just in case.
We began some “getting ready to leave her” tasks but mostly tried to ignore the fact that within two weeks we’d be moving off Ortolan, our full-time home since Oct 2010.
Our second iPhone5 cord had crapped out. This one was an aftermarket cord (from the store that shall not be named) but the name brand one didn’t last much longer than a year either; guess we know where the profit center is. Luckily Russ had noticed a RadioShack across the street from Hannaford’s and since I’d forgotten a few important items the first trip, we walked back after a tasty lunch at the Lobster Dock, known for their Bobby Flay’s Throw Down Crab Cakes. Family Dollar sat next door but they didn’t have the cord we needed, so RadioShack was it. At the register I saw the local newspaper looking unusually wide. How long has it been since newspapers were 16” wide? Damn long time and this is one of the last in the country at this size.

The 3D printer caught our eye and I’m still baffled at how a printer- one that you or I could sort of afford- can produce 3D components. The whistle has the tiny ball inside- all made as one component. The small white bottle with screw top is made as two but the top screwed on perfectly. Technology moves faster than the speed of light nowadays. 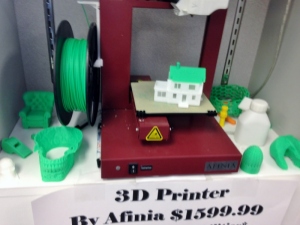 We chose a California wine as a nod to the earthquake that rocked Napa Valley earlier that day. Even better was the fact that the Bridlewood winery was one we’d visited years ago with Jack and Kerry. Not Napa Valley though but close enough. 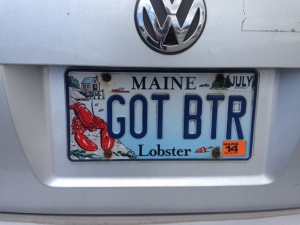 This really says it all