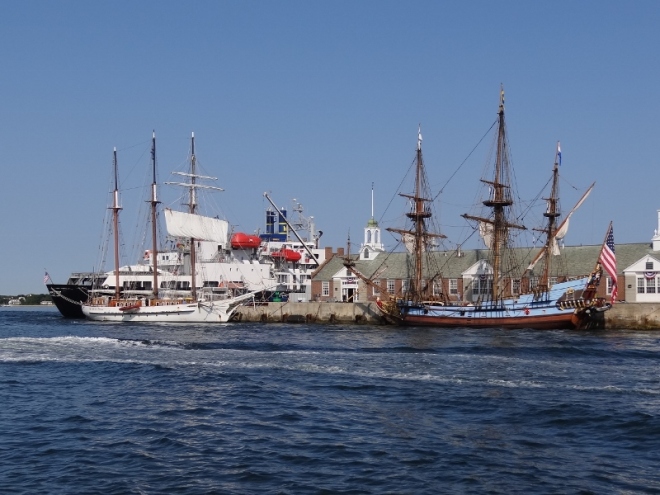 Nearly 300 years in the making and celebrating its 100th birthday this year (bet you figured that out), the canal is not as intimidating as you might think. The first idea of a canal is credited to Pilgrim Myles Standish in 1623 but as often happens, bureaucracy kept butting out common sense and thus the canal remained a wishful thought until July 29, 1914. Now that’s a darn long time to wait. August Perry Belmont finally made it happen through foresight and monetary fortitude, not to mention much red tape and the inevitable delays. But how much money can one man have? Even with partners perhaps, he could spend only so much and the resulting canal was a bit narrow. Accidents, strong current and low bridges caused some mariners to opt for the round-about route.

The railroad bridge closed on our tail. Equipment was being removed related to the prior night’s fireworks.

In 1928, the US government bought the canal from Belmont and the U.S. Army Corps of Engineers realigned it, built the Bourne and Sagamore bridges to make for an easier transit. Today, it is the world’s widest sea-level canal (480 ft at a minimum) with a total dredged length of 17.4 miles. The section that cuts through the Cape is about 6.5 miles. 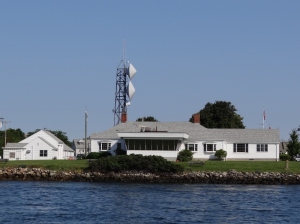 The rules are easy: complete your transit within 2.5 hours, consulting those tide/current tables to have a slack or favorable current. The current can run up to 6kts; that’s more than through Hell Gate in New York’s East River. But no speeding, mind you; 8.5 kts is the stated limit but we zoomed along at 10kts on one engine- maybe we didn’t need the engine after all.

No sailing allowed though, so motor or get yourself towed through. Larger vessels (65ft and over) must hail Canal Control and receive approval prior to entering the canal- one controller really read the riot act to those who messed up on that one!

Vessels going with the current have the right of way. And while you may see people fishing along the banks, fishing off your boat is a no-no.