Mile marker 115 in the Alligator-Pungo Canal. Some states have these every five miles.

We are traveling north about one month later than the past three years. Noticeably warmth, with fewer windy days and other cruising boats but the delay puts us into the thunderstorm season. I mean, who wouldn’t want more thunder and lightning? Sigh. Cape Lookout was on our mind as was a detour through Pamlico Sound to Ocracoke and Manteo, but got scratched due to rain and TS forecasted over the coming few days along with 15-20kts wind.
Naturally, playing it safe improved the weather and we sped through North Carolina eager to avoid the “at least one crappy weather event” that always seems to occur somewhere between Oriental and Beaufort, NC. Wednesday would be our third 60+nm day in a row, taking us through the 20 mile-long Alligator-Pungo Canal, the Alligator River and its fickle swing bridge, then cross the Albemarle Sound. We happily accepted low winds that made for a pleasant day.

S/v Ruffian beats us by a length as we pour it on to make the opening, no thanks to the uncommunicative bridge tender

Tuesday night we got a taste of summer-time marsh bugs; but I guess this was just the scout pack. Wednesday as we got closer to shore and anchoring, the entire army and reinforcements swarmed us. Not mosquitoes thankfully, but 3 kinds of flying things; most were black, some tiny and almost clear and the others blind mosquitoes we guess. The temp had climbed to nearly 90 and on top of that thunderstorms were headed southeast. The outside was covered and of course we have plenty of small openings that can’t be plugged up.

Do they like us or are we being attacked? Ugh- not pleasant either way 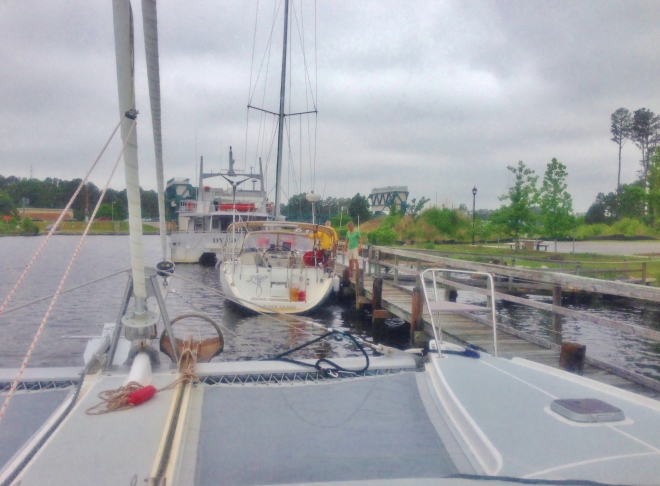 So we did what we had to: retreat!! Started up the generator, ran the AC in one hull at a time and headed below for happy hour and dinner. Much of the evening and into early nighttime was a constant lightning show, minimal thunder, rain and when the front line passed over us, a 180 degree wind shift (we planned for the shift and the anchor held well). The wind kicked up whenever a blob came near, but I was relieved that we didn’t receive any direct hits of the thunder and lightning producing red and purple centers. As you might guess, our visiting insect army was not happy and those who did not perish (and are either glued to our hull, in our wet-dry vac or smushed in tiny pieces of paper towel) departed for who-knows-where.
Ah, bug and temperature relief all in one. Russ spent 10 mins vacuuming up the interior dead bodies the next morning as those without a sense of direction went the wrong way when the thunderstorms arrived.
Thursday and Friday nights would find us first at the free dock before the Great Bridge Bascule Bridge and then at the one after. Don’t ask.

Dinner at Chili’s. That is our free appetizer for signing up for emailed specials

Tug and barge pass by after exiting the lock.

Saturday we moved all of 4 miles through the lock and one opening bridge, to Top Rack Marina to watch the lift truck move boats in and out and around. 🙂 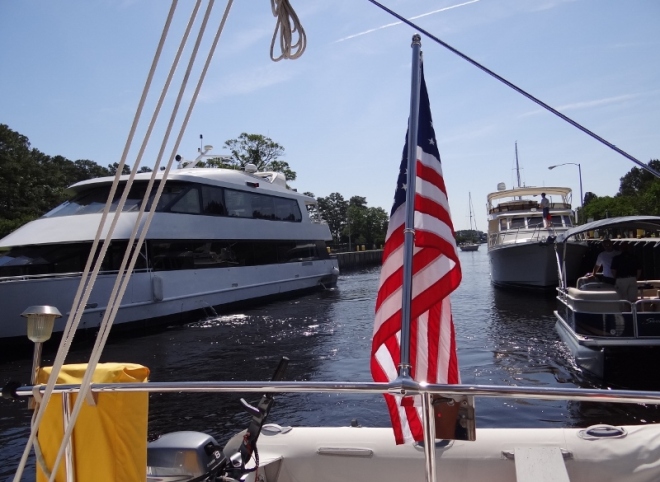 We lead the pack of seven boats in the lock. New pontoon owner was getting a lock transit demo

The good part of this place is an excellent diesel price, super-fast wi-fi and if you dine at the Amber Lantern Restaurant on-site, your dockage (only $1ft anyway) is free. Say no more. We needed water and fuel anyway before starting our offshore Monday morning and the wi-fi allowed us to update apps, photo stream and blog free and easy. The people in the pontoon boat behind us in the lock confirmed that the restaurant was excellent, which we knew from last spring’s stop. The showers are beautiful, spa quality and even if I hadn’t needed clean and styled hair (for my night out you know) I’d have used it anyway.
Sunday should find us anchored 38 miles away near Cape Charles; positioned for a quick exit out of the huge and busy harbor. Monday at not quite o-dark thirty we’d begin the 240nm offshore trip up to Sandy Hook, NJ, the longest single leg of our 2013-14 cruising year. S/v Makai, who we finally met in Staniel Cay, you may recall, was ahead of us at Cape May leaving for Sandy Hook on Monday also. Perhaps we’d both be anchored off the Coast Guard station Tuesday night. Stay tuned.