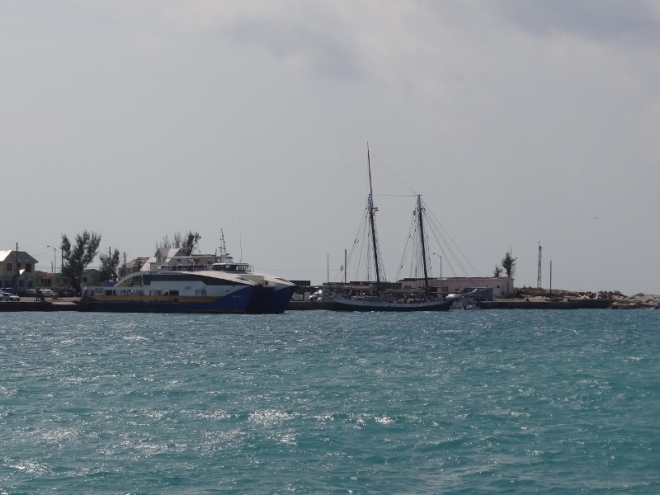 The different weather services can and do use different models to create their forecasts. Often two may agree but a third is somewhere out in left field. We always hope that when all the ones we use are in agreement, that they’ve nailed it.. because can they all be wrong???  Isn’t that a leading question? The answer is yes they can!!! And they were and we suffered… but not alone. Thursday was predicted by our two sources to be somewhere around 13-16kts, winds out of the SW, going to west and dropping way down as they clocked around to NW and then north.  Governor’s Harbor is exposed from WNW to NNW so we knew we’d be in for a certain amount of discomfort until the wind and waves moved north and then NE.

The trip began well enough at 8:15 as we began sailing right away in 10-12kts of SW winds. We wanted to sail the entire way before the wind dropped down too much. Oh what a joke. Within the first hour of the 3 ½ hour trip it became clear the forecast was oh so wrong. When the wind hit 20kts we reefed the jib and I began to envision a very unpleasant few minutes when the time came to drop the main. Have I mentioned that this process is not as simple as head into the wind and whoosh the main drops right down into the stack pack? Our speed often exceeded 8kts; great if we’d been racing, but funny, not single other boat departed Rock Sound.

A reasonably good-sized island, Levi Island sits a stone’s throw above the harbor and we briefly considered anchoring there for protection but with SW wind, it wasn’t any better than the harbor. We chose the lesser of the weevils, so we thought, and figured we could tuck in fairly close to shore in the southern corner. Wrong again. Some floating house raft thing with AIS named KhanTiki or something close to that, was anchored exactly where we wanted to be.

Never saw anyone aboard, but they had the best spot in the harbor. This was taken in calm conditions

Anchoring with the shore at one’s stern is not desirable and we could have moved to Levi, but the forecast had promised the winds would lessen and so too would the large swells entering the medium-sized harbor. To make things more interesting, the charts indicated “poor holding” unless you could find a sandy spot or get closer to the beach where sand was abundant. Our first attempt was perfect; the anchor grabbed right away, but we found our stern in 4ft and that was not going to work since the swells caused a great deal of pitching which made the rudders touch bottom. We eyeballed a spot that looked sandy further away and dropped the hook. I’m at the bow as usual and if I hadn’t been so focused on doing my job I might have noticed how large the swells had become and how much we were bobbing up and down in them. This was a new one for the log book.

The anchor didn’t grab right away but then it seemed to hold fast and after I attached the bridle and we pulled back again, she didn’t budge. Needless to say, we cursed the weather, watched the chartplotter to be sure we weren’t dragging, set two drag alarms, and waited in vain for the wind to shift to a non-west direction. I was extra bummed because we could see seafood being sold from two fishing cleaning stations over on the shore road that runs along the beach.

By 5pm the wind had dropped down to 10kts out of the NW but the swells, which take longer to change direction, were hitting us broadside so preparing dinner was fun. Two monohulls had anchored behind Levi and from a distance they appeared to have made the better choice.

I almost believed Russ when he assured me that, “tomorrow will be a better day and we can spend time ashore.” No doubt he still wasn’t giving up on the lunatic forecasters.  Mother Nature had continued to outfox us all; Friday was quite the weather day; it began with pouring rain at 5am, increased wind and distant lightning. Rain on and off all day, moderate NW to NE back to NW winds with a peak at 24kts one time.

During the day a small sailboat about 26ft anchored close to us and one of the two from Levi anchored on our other side a better distance away. Conditions were slightly improved once the wind shifted more north but those boats, especially the smaller one rolled from side to side and pitched in the swells that I was becoming seasick just watching. By 3pm things were looking calmer and a “better day tomorrow” for Saturday was beginning to sound believable. At least all anchors were holding; can’t rely on what the charts say either- for which we were immensely thankful. Note: we talked with the two Levi Island boats on Sat and they said that even Chris Parker was fooled by Mother Nature this time.