Flamingo Cay bight- very protected from SE winds. You can barely see two sails off in the distance

Tuesday morning the “weather service deprived” vessel s/v Ortolan did a no-no; we asked another boat for a weather update. This is a request for that morning’s Chris Parker report on SSB which is heard on different frequencies at early morning hours such as 6:30 or 7am.  I won’t go into our convoluted and sorry tale of SSB receiver shenanigans two years ago, but let’s say that we aren’t without it for lack of trying, really, really hard.

We knew when we came down that we’d need to make this request once or twice and hoped that we wouldn’t be banished from the community because we needed a weather report. Fortunately, catamarans are well represented in the Jumentos and well, maybe a fellow cat would look more kindly on our request.

Umm, now who could that be since we didn’t really know any of the boats anchored at Water Cay. How about the cat in kilts, Sam the Skull?  We’d spoken briefly already and in this world that’s a great start. Of course he gave us the update. Of course he wanted to know if we were a Seawind. Of course we had to say we were a Maine Cat 41- but that’s ok. We agreed to meet up again in George Town and “talk catamarans.”

The forecast contained a few more days of basically SE 10-14, perfect for one or two more days and then return to Elizabeth Harbor. We are dangerously close to being in a condition of “heading north” given that we have gone as far south as we will go. Technically, once we leave the Jumentos we are heading back, but let’s blur the lines and not use those words just yet.

Vessel and crew enjoyed a pleasant sail 14nm to Flamingo Cay. Flamingo is shorter but fatter than Water Cay with an ample deep notch or bight at its north end; great place to anchor when the wind lacks a northerly component. S/v Free Bird had the choice spot right off the beach and we anchored a respectful distance away. Joanne and John greeted us via kayak and gave us the low-down on paths and snorkeling. I can’t be positive but I think Free Bird helped us back in Oct 2010 during our first lock experience at the Great Bridge Lock.

Shells were in short supply but I picked up a huge purple sea fan; a perfect land-home decoration or a strainer in a pinch 🙂 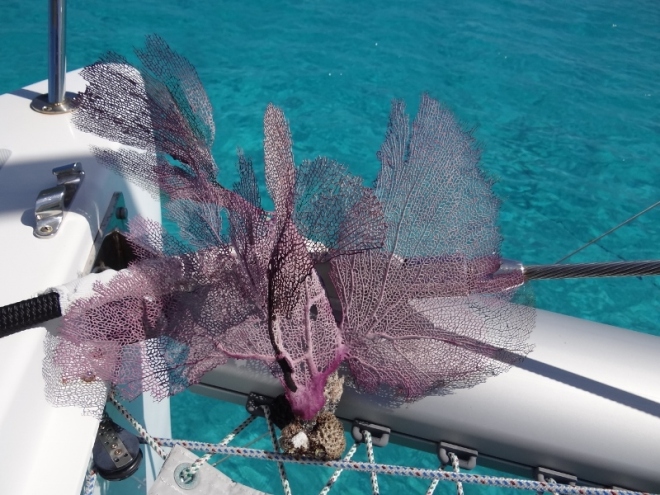 A path of sorts- most of it requiring a youthful dose of balance on wobbly iron-shore boulders over to the ocean side where we were surprised to find shrub and grass-covered rolling hills. Maybe not equal to what you are picturing in your mind, but for the Bahamas, a reasonable facsimile.

I nearly ruined my sandals for this view

Over at the west end of the beach was a path over to the anchorage and beach on the Cay’s west side. Free Bird told us we find several large ponds with red shrimp along the way. Apparently red shrimp are the diet of the pink flamingos who no longer reside on Flamingo Cay… or so my research indicates. 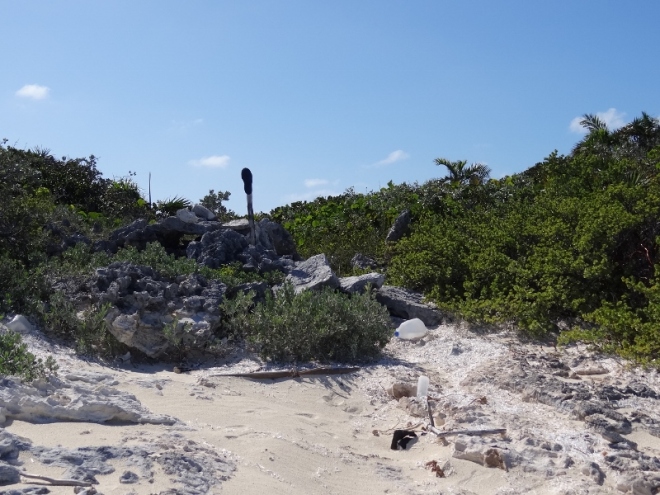 Paths are usually marked in a similar fashion; with sandals, cairns or plastic bottles and floats hung from branches

This path was well-marked with cairns and flip-flops

The ocean-fed red shrimp holes- the distant one was loaded, not so much the others

By afternoon we’d packed in beach and path walking twice, snorkeling (aka lobster hunting and where Russ was chased by a menacing barracuda) and make tentative plans with Free Bird to hunt for lobsters near the southern tip of Flamingo Cay. The wind picked up a bit which brought the nearby ocean waters in for an uncomfortable swell, so we opted to move over to the Two Palms anchorage on the west side, figuring the swell would be less. Stay tuned and find out.