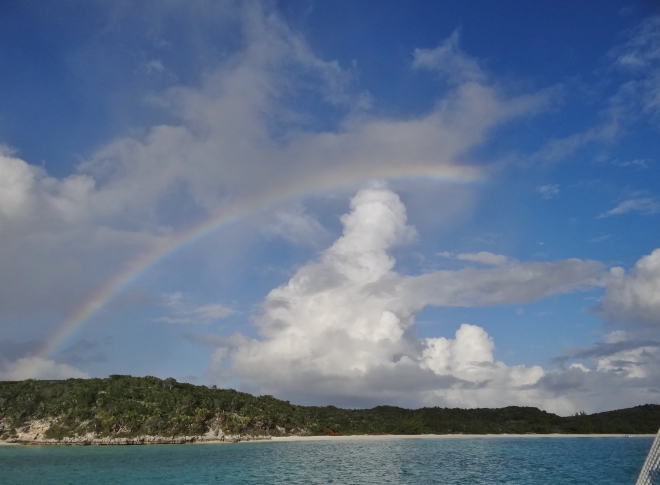 Our second-most wished for Christmas gift was favorable weather for a jump over to Long Island and/or Conception; possibly the northern Jumentos. Amazingly we got our wish soon after Christmas and on Friday we motored in low winds to Long Island, making water along the way. Most of the route would be in depths lower than 20ft, but the first leg was over 40ft.  Ordinarily we think that’s not deep enough to catch anything, but in calm water, why not. Plus Benj’s bucket list for the trip included successful fishing and lobstering.   Damn but if we didn’t hear that “clunk” sound less than 10 minutes after the lines were in. Russ made sure we didn’t have a repeat of two weeks prior when we foolishly fed a shark.

I slowed a bit and we all manned our battle stations and grabbed our weapons. Sure enough we’d caught something- new to us and about 2ft long. Not a fighter, just wanted plenty of alcohol.

Our fresh catch of the day

Benj was totally up for turning fish into food, but would you expect a sustainable agriculture major to be proficient in fish gutting and filleting? Fresh off a semester of “Animal Proteins” where a variety of meats and seafood were butchered, prepared and gloriously consumed, dispatching one fish would be easy, even with our not sharp enough knife.

This is not the fun part of fishing.

An hour or so later, the wind now down to 5kts we decided to stop “near” a reef for a short lobster hunt. The guys headed off for a close-by spot which was no good and then went at least a mile toward the reef area. I stayed on board to make sure the water maker behaved and to do some boat-keeping.  I could see them returning- just a speck at first, then larger with a spear held high above smiling faces 🙂

Dinner of surf, surf and turf was delicious and the dinner conversation lively as we re-lived our day. While the men were away hunting I had a single visitor swim by; at first I thought “small shark” but as I watched it from different angles, I leaned toward Triggerfish. The one picture I got was no help as parts looked shark like and others not. From now on though we’ll dangle a baited hook off the boat when we are anchored in a fish zone.