Our last time in Beaufort (are you saying Bew-fort in your head?) was over a year ago. With only a light breeze by afternoon we anchored easily in the anchorage in 23ft! The anchorage lies around the outside of the channel’s curve so it’s deeper there. With north wind protection our only worry would be how the boats would move around during slack tide.  A boat we’d seen on and off since Wrightsville Beach was there already. S/v Wonderful Life (San Francisco) is traveling with Mom, Dad and two kids. You won’t be surprised to know their dinghy is “It’s a”.

The shops and eateries in town looked healthy and busy with a few new additions since our last visit.

The world’s teeniest and cutest library

Dinner was at Panini’s and boy it was delish!  I chose Mediterranean Shrimp and Grits; the almost sweet flavor of the delicate sauce was very unique and I couldn’t determine exactly what it tasted like- was just darn good. Russ chose a Pork Roulade over sautéed veggies and even had enough for a lunch doggy bag. 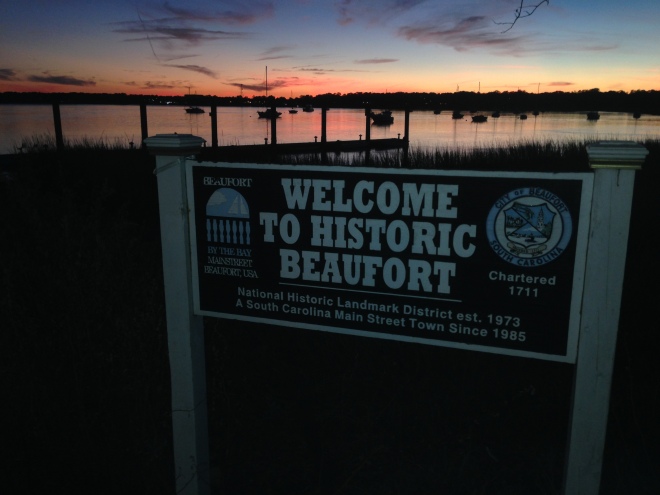 The weather checking consumed a bit of our time that evening and we decided to believe the NE 10-15 forecast touted by three services.The 163nm overnight would take 25- 27 hours depending on our speed. Passage Weather showed “something” farther out in the Atlantic that was sending in large swells but the farther south we’d get, they would lessen a bit. I stomped and pouted about using Port Royal channel to head out; it is long- and I mean long and rollers are always present in some degree. Did it once, didn’t need to do it again.

So we did because it was a safer, deeper, better marked channel compared to Calibogue, the next spot to exit out.  We ended up sailing more than 16 hours of the 25-hour trip, motor-sailing the first two hours getting out and one-engine motoring for about 6 hours after midnight; much better than we expected thanks to the wind 13-18kts Saturday and a healthy 11-15kts at night. The swells were generous, at least 5 feet, but sources we checked later indicated more.

The wind and swells calmed down measurably by the time we were within a few hours of the St Augustine inlet; a just-dredged (again) Class C inlet. No genius mind needed to know that C is not as good as A! We left the main up for stability and had to throttle back on the engines to keep under 8kts as went came in. Was real fun when three monohulls abreast coming out negotiated around us; later heard a race was taking place just past the sea buoy – it was Sunday after all.

Ok, now to get the main down before the bridge opening at 12:30- had plenty (too much) of time for that. Phew all set. Then we see s/v Tyler J looking like they plan to anchor- where?  in the ICW? We’d seen them on AIS coming from offshore too. A bunch of us pass through at 12:30 and so does Tyler J. We’d already called the marina and had our mooring assignment; M57. We have the map so we know where to find it in the large field. As we head into the field, Russ says to keep an eye on Tyler J; they seemed uninformed although we’d heard another boat communicating with them. Sure enough as we approach M57, I am at the bow with the boat hook, we see bad boy coming toward it from the opposite direction.  At first I’m confused- oh, he really plans to take our ball! I holler over that we were assigned that ball as the boat slides against the mooring and over it, spilling the pennant in the water (these balls have a collar that can hold the pennant). The current runs strong through here and one mistake can set off a chain reaction. Took me two tries to grab the pennant but we got ourselves secured without further incident. Our happy faces showed when the marina launch came by and escorted Tyler J to a mooring on the outside row further back.

A good night’s sleep and we’d be ready for town on Monday.