Did I get your attention with that title? The reality is that the swallows make the vortex and we enthralled humans congregate on the river’s edge in various types of vessels to watch this amazing display.

Starting some time near the end of August, during the entire month of September and into October, thousands of birds congregate in the lower Connecticut River Valley on their migration route south. One massing in particular is an attention-getter. Each day at dusk in late summer and early fall, hundreds of thousands of swallows fly in from all directions and gather over a small island in the Connecticut River. There, for perhaps no more than 20 minutes, they mill around in an enormous, undulating mass of life, specks of black in the fading late-day light. (you can read this as: difficult to snap a clear photo in fading light)

Primarily comprised of tree swallows, it is speculated that these birds fly in from as far as 50 miles away. As many as half a million may come in at dusk where they converge just before sunset over the island, often creating a spectacular “ballet” in the sky. Then, just after sunset, following the lead of one swallow, they form a huge dark cloud that within seconds becomes a funnel and whoosh, they all settle down into a communal roost in the reeds for the night. The vortex happened at least four times while we watched; imagine if all the swallows formed one huge one; a truly spectacular event to photograph.

The boats gather to await the swallows 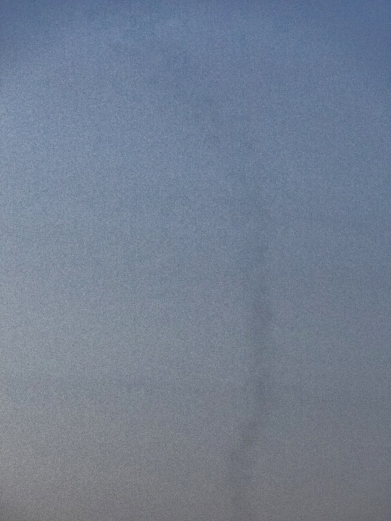 The large mass forms, then funnels down into the marsh below

The weather gods smiled kindly upon us all week and after we engaged in a day of boat cleaning at the dock it was time for a short trip down river. On the way back Sunday we’d planned a fuel and water stop at Old Lyme Dock Co. where the diesel is less costly, probably fresher and the water very drinkable. Thanks to a longer than usual wait for the train bridge to open- oh did I neglect to say “Old Lyme Draw? – time ran out on that plan. No worries mon; Friday we’d head down river to Old Lyme for an all-tanks fill up, stopping by Goose Island to watch the swallows then anchor off Nott Island opposite Essex harbour for the night. Don’t you love it when a great plan actually works out just perfect?  Oh, me too. As a bonus the wind and current kept us pointed bow north so we could sit on the roof and take in the view.