Although the forecast gods (related to Zsero- god of the unknown) cast down upon us their big wind and waves for several days, we sat snug on a town mooring; a difficult feat during the prime season of July and August. Hangin’ out for the week was fine with us; a near-perfect return day would have us returning at our leisure- AND NOT BEFORE!  We made good time motoring from Oak Bluffs catching a favorable current most of the way. The wind slid from calm to calmer and so did the tiny wavelets. If we can’t sail we at least want a favorable current and/or calm seas- well, I do anyway.

Tuesday brought in the big winds with gusts to 30kts and a bunch of serious sailors who also possessed excellent mooring pennant retrieval skills. Some were single-handers, some were couples and others just several guys- enjoying September sailing.

Our VHF radio was off; we’re on vacation after all. Russ has a rare episode of ESP, turns on VHF 16 and immediately hears a boater in distress in the Great Salt Pond talking to the Coast Guard. Uh, I think the boat is right here in New Harbor, also known as Great Salt Pond. Binocs in full use by me, Russ hails the BI Harbormaster who only monitors CH 12. She hails Ms Viv the vessel in distress; water over the floorboards. The captain describes his 26ft sailboat with no sail cover and says he’s anchored by Breezy Point. We’re damned if we know the location of Breezy Point but it’s not on this side; Russ heads across with our crash pump and long discharge hose (kept at the ready in an engine compartment). The harbor rescue boat is en route and when they tie up to Ms Viv, Russ ties Bunting to them and within 5 mins has the water pumped out. 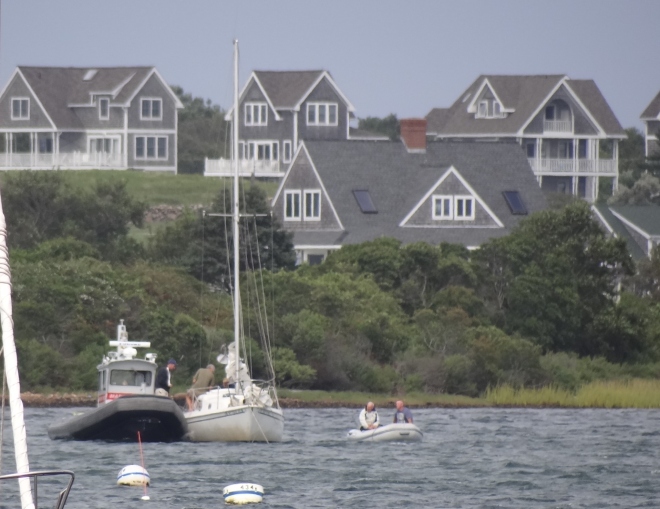 At max zoom: can make out Russ on Ms Viv. A second dinghy stands by

Bill’s story is that he’d recently anchored after arriving under sail in Ms Viv who he’s owned for two years.  Noticed water coming up over the floorboards and when he couldn’t stem the tide he called the Coast Guard, figuring someone in the pond would hear the call and be able to quickly assist.  As Russ was helping with the mooring, Bill saw more water and the Harbormaster had him get to a nearby dock.  The culprit was a hose in the unused head that had become unattached during the trip and with each wave, water would spurt through and into the boat. We provided a wine cork to plug the end of the hose- I always make sure we keep a few on hand- left the pump overnight just in case and hoped the water would remain outside the boat.

The next morning, Russ retrieved our pump and soon after Ms Viv sailed off.

Ms Viv prepares to sail away from the dock

Thursday afternoon shortly after we returned from a short walk and cemetery stroll, CH 16 sprang to life with a call to the CG from a boat in Block’s New Harbor. We’d noticed a sailboat come in a short time ago under sail (most have done that this week) and was still sailing around once in the anchorage area. Seems they’d put down their (puny) anchor, it was dragging and their engine failed them entering the harbor. Repeat steps from above- binocs- good, boat has red hull- I see it; Russ hails harbormaster and heads across. Our dinghy doesn’t have a bridle which is helpful when attempting to tow a larger vessel so Russ wasn’t able to help much, but the harbormaster tied Flash alongside and brought them to a mooring.  I can imagine how the pounding hearts and tense nerves (came through distinctly over the radio) found a much calmer zone once the boat was secured.

We wonder if Flash could have kept its sail up until securely anchored and used it for propulsion if the anchor wouldn’t set. Much of the pond is grassy- not good- and much is deeper than 20ft- also not good. Where they were was grassy (Breezy Point is better, I checked) and I’ll bet the depth was 10ft or more (we had anchored in that section back in Aug). With 50ft of line out that wasn’t enough scope and/or the grass did not agree with their anchor.

3 thoughts on “Busy Bees at Block”