After a long après-visitor recovery period- no, only joking. The dolphins returned for a leisurely swim around the boats; Patti donned snorkel gear to swim with them and I considered it, but hey someone has to play photographer.

S/v Friendship put out a request for an info-share meet re: Long Island and Eleuthera on Volleyball Beach so we did that and met some nice folks, including Keith on s/v Camelot from Old Saybrook, CT. I don’t need to mention what Cort and Frank were up to; volleyball what else? After the games Russ received a second massage from Agnes on s/v La Dame En Blue. Her former occupation was a circus acrobat and massage therapist for the acrobat team; I may not have that exactly right but I’m darn close. Not Swedish massage but a lighter touch method that provided excellent temporary relief. She wouldn’t accept anything; the standard “giving back” line, but we did manage to sneak a bottle of red wine to her. 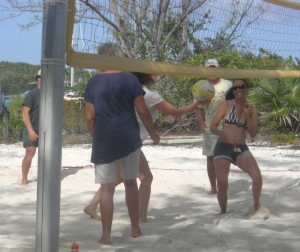 Agnes on the right – Cathy goes for the ball

Chatted a while with Bernard of s/v Ti’ Matou, our sea bean idol extraordinaire who we’d met in Thompson Bay along with his wife Claude (no, not Claudine. Her parents wanted a boy perhaps?) Bernard and Claude are French –as in from France but Canada has been their home for the past 30 years. Ran out of time at Thompson Bay, but now we might be able to fit in a visit where Bernard would show us how to sand and polish sea beans. This would be way more desirable than having someone show me their tramps (inside joke).
Our time in GT was drawing to a close; the forecast was favorable for a pleasant sail to Conception Island with low wind the following day. Sunday would be a horse of another color altogether, although right now the front looked mild and we could tough out the west winds on Cat Island; assuming they were short-lived.
First though, those pesky preparations loomed large- as in a trip in to town in a sloppy harbor. An SSCA gam was happening at Big D’s at noon; okay to buy or bring lunch, just buy drinks there was the request from Big D. S/v Sea Schell was the host; Melinda and Harry Schell actually, with Melinda being on the board of directors for SSCA. I introduced myself, mentioning I was one of Barb’s (SSCA Bulletin Editor) proofers and was happy that Melinda knew of me. :-). Learned that a boat in the harbor, who I’d wanted to meet, hailed from Essex, CT (our home town) was going to be a new cruising station for SSCA; summers they’d be back in town.

Our first SSCA gam, or get together.

Then last but by no means least came the visit to Ti’Matou where Bernard gave us the full demo on how to sand and polish sea beans. I wasn’t expecting such a hands-on demo; I figured he’d show me a few in various stages and explain the process. Instead, he chose a hamburger bean that had seen some sanding, and he finished it while letting me inspect his work along the way. The final step was to drill the holes, string it on some faux-leather cord and voila! He gave it to me; I was so thrilled. Claude was weaving a palm leaf basket – was going to be a two-tone one- just lovely.
Good-byes are not my favorite thing, but we did say a few. Knowing we’d meet up with friends in Abaco helped.