Make hay while the sun shines- you all know that saying and let me say that it applies to all aspects of one’s life and not simply a farmer’s life! The boating version replaces the word “hay” with the word “way”. Weeks of pleasant weather would likely come to a rainy, thunderous halt… right about the time we’d be headed from CT to RI. If the forecast was to be believed, we’d have 2 days max to make the 75nm trip. Last year the weather allowed us enough time for two overnight stops, arriving the afternoon before our scheduled date.

This year, Monday was an ideal traveling day- for a motor yacht. Perfect wind right on our nose as we headed east through the Race, passing just south of Fishers Island then on to Pt Judith’s Harbor of Refuge. Looking toward the coast just past Fishers you can see three states in one view; CT, RI and NY. Maybe I’m cheating a bit, but Fishers Island is part of NY. Crazy that one. 50 miles down, 25 to go. 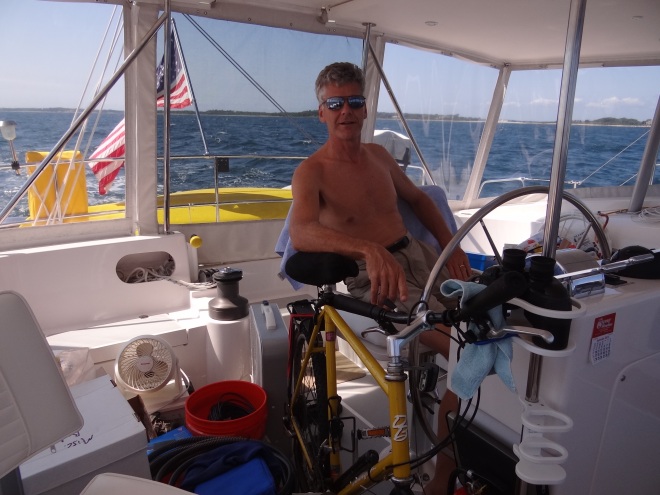 The bike makes a great armrest

Tuesday morning loomed gloomy, but thankfully no fog. Russ took a look at the weather radar and put an immediate hold on breakfast. If we left RIGHT NOW we might get to the marina before the huge T-storm cell reached us. It was already moving NE, having visited our initially planned stop at Fishers Island. I refused to look at the screen, adamantly trusting that my usual “just think positive thoughts” would see us arrive dry. The waves weren’t bad but as we headed up West Passage, keeping Jamestown on our right, they calmed way down since the land offered protection from the easterly wind. Breakfast re-commenced and we waved to now familiar Dutch Island. The Narragansett waters that must have been bustling over the long holiday weekend were vacant save for a few fishing skiffs. As we pulled up to the dock, sprinkles began and within 15 mins – pouring. We congratulated ourselves on making the smart decision to get as far as possible on Monday. Later in the afternoon we moved the dinghy and bike off the boat, the kayak to the bow and collected the vacuum pump purchased on eBay and delivered to the marina.

Ready to climb aboard

This one wins “most unusual”. Not sure how else to classify her.