I really enjoy St Augustine, especially in calm and sunny weather. Finally got to talk with the Celise/Spirit crew. Soon after we picked up our mooring, they came by after fueling up and stopped to chat for a few minutes before heading out the inlet.
We hope to see them in the Bahamas.
Being a weekend, town was busy but not so packed that you couldn’t eat or shop easily.

Tried to get World Quidditch Cup news; no luck until Benj called with a Green Mtn Welsh Dragon team update on Saturday and a final results call Monday night.  They won 4 of 6 games and their second loss was to the #1 seeded team in Division II. The GMC team has awesome spirit and cohesiveness and did not fly away to lose easily! To think that one month we passed right by the island park where the games were played.  YouTube videos should be out around Wednesday. Can’t wait. 97 teams competed in the World Cup which had opening and closing ceremonies as well as entertainment and an athletes village. Sound like some other well-known event?

Monday we waved farewell to St Augustine and enjoyed one of those wonderfully near-perfect travel days.  Sunny and warm with light winds expertly designed for ICW travel, by noon temp reached 72, with 76 the day’s high. Vitamin D ripe for the taking, the current our friend over half the day, bridges were extremely well-behaved and ran across only a few other  boats heading south until Daytona Beach area.  Speaking of Daytona Beach, what is it with this area?  Last year we “went aground”
for a few seconds in a “gee that was dumb” move and this year we got boarded by the local Sheriff boat; affectionately known as “potty police.” Hey, I’ll take this over a Coast Guard boarding.

We’re in the process of passing another boat, s/v Ascension, when we see a small power boat zooming our way. Russ comments “oh yeah I thought that might be official” and we wave as usual.  Yikes, we look back as they’ve turned around and next thing we know they’re alongside asking us to slow to idle while two guys come aboard. They were polite, asked permission first and stated their business. We resumed speed; Russ providing a tour of our two sea cocks while I took the helm and chatted with the other guy. A few minutes later off they went; with a two-fer and a look at a nice catamaran. A few minutes later, Ascension does what I would have; he calls us to get the scoop. Russ jokes that “we’re not supposed to pass monohulls” then fills him in.

Our near-perfect day ended by 3pm in a new spot, Rockhouse Creek- not even a creek- that connects the ICW to the Ponce de Leon inlet channel. By sundown  7 of us were neatly packed in; but no wind worries tonight, just the changing tide to turn us around ever so gently. Russ launched Bunting to go exploring while I snapped pictures of egrets, dolphins and osprey enjoying the pleasures of low tide. He met CT-ites Robin and Michael on s/v Sea Biscuit. Headed for… where else? Bahamas. Gosh, we don’t feel so left out this year. 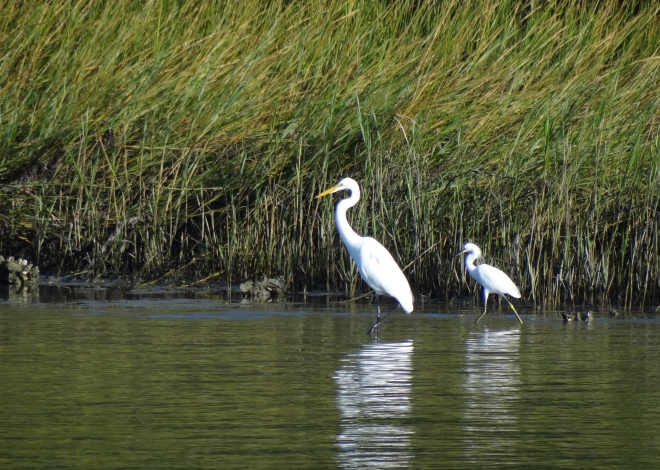 Tuesday: “bridge to bridge” or “sailboat parade” would describe our day. The first opening bridge of the day was 2 miles from the anchorage; we joined 5 other boats for the 8am opening. One was a small sport fish who left us in his wake after a few miles while the rest of us sailing vessels fell in line for the picturesque trip down the Indian River North and Mosquito Lagoon.  I had my first manatee sighting; no surprise though as much of the 20 mile stretch contains signs warning boats to either maintain a slow speed (yep we can comply) or a speed not to exceed 25mph. Some areas have different speed limits for inside vs outside the ICW channel and day vs night. Manatees prefer shallower water and hopefully avoid the channel.

After something like 15 miles, we came upon s/v Sea Biscuit and s/v Mojowho’d caught the 7:40 bridge opening. Now we had an entourage of 7; no one going fast enough to pull ahead much. Got interesting when a motor yacht came by and passed each of us in turn, slowing down to a m/y crawl in the narrow channel at each pass. 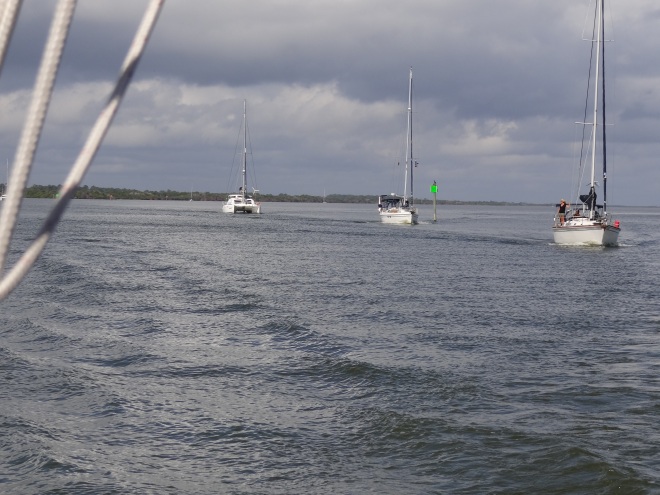 Got a call from our Canadian friends on Polar Pacer, the Prout catamaran we’d met last Nov in Vero Beach. Mooring #16 was ready and waiting (with them on it of course) for a reunion raft-up!

At Titusville, the parade of boats began to dwindle one by one until past Cocoa was just us and s/v Nauti Nauti a Leopard 40 cat. They did a “make your own anchorage” spot off the ICW while we continued on to one of our own just north of a causeway for protection from 10kts of S winds.