We breezed through NYC, passing through that notorious corner Hell Gate with a slight favorable current.
Shorty after entering LIS the wind picked up and we switched engines for sails,, and boy did we speed along. The photo shows that we hit 11 kts in approx 22 kts of wind. I was very uneasy. 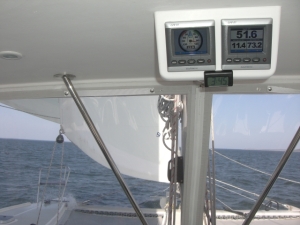 Anchored in Northport Harbor, NY- just off Huntington Bay. A local marina maintains 600 moorings but we snubbed our noses at picking one up.  Listened on the VHF as a boat we’d seen on the way in, called the Coasties for assistance getting pulled off the beach. The wind was blowing near-stink, his engine wouldn’t start and his jib was flailing in the wind. Poor guy wasn’t a spring chicken and when he had trouble telling Sea Co (SeaTow) exactly where he was, Russ helped out. 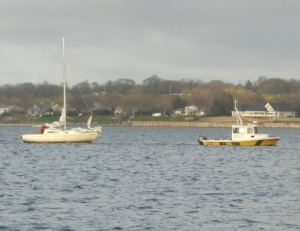 Wednesday looked to be the day of choice to travel the final leg back up to our summer marina. Light morning fog dissipated by 8:30 and off we went, raising the main before entering LIS.  How many sail combinations did we have? How many hours in and out of the fog? Geeze, I lost count. We did sail 4 hours and we did make the approach to the Old Saybrook breakwater in clear skies, so for that I was glad. The Old Lyme draw bridgetender was as grumpy as always, but we only waited 5 mins for the trains before he opened the bridge; gave him some monotony relief, uh? So many logs, branches and “stuff” in the river like I’d never seem. We dodged the ones we could and what we couldn’t, “down the middle!” The finishing touch: just south of Essex the fog reappeared, only more like a heavy mist than thick fog. Landed at the T of E-Dock at 7:30; another 11 hour day. Felt great to be back and another great night’s sleep was on its way! 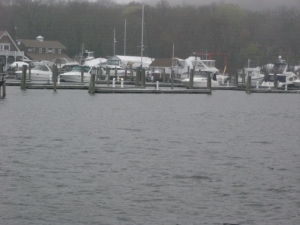