We’re half-way home, passing thru the Cape Cod Canal. Wide and attractive, with walking/biking paths on both sides, the canal was easy to transit. We had made sure to go through with the current.
After saying good-bye to York Harbor we continued south and ended up in Plymouth, MA where we anchored in the harbor.  Benj had never seen Plymouth Rock, so a quick trip in for a few supplies and a peek at the Rock, then we were on our way.
A stop at Brewers Fiddler’s Cove to fill up the diesel and water tanks was our only docking of the trip. Russ was a pro and we snugged up alongside the dock just as sweet as can be. 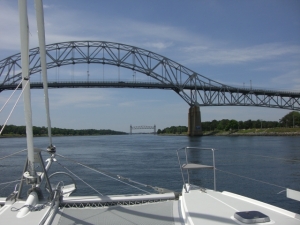 The Less Traffic Way to Visit the Cape