Crossing Florida has been a great trip with many unusual sights.  Central Florida is completely unlike the east or west coasts & certainly not Disney World!

Smoke on the water. Florida is big on controlled burns to prevent wildfires. 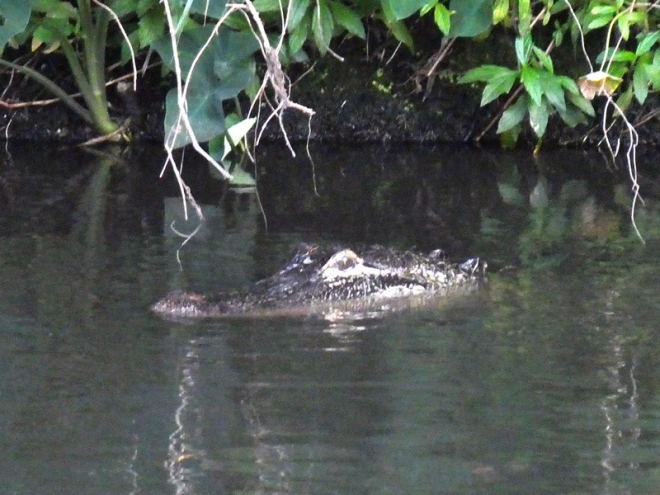 This little guy near our boat slip kept on eye on me – likely hoping I would fall in!

A graveyard of abandoned dreams. There are several large boatyards in central Florida (semi-hurricane protected) used by seasonal boaters who haul their boats for the hurricane season while spending summers in their northern homes. While many are indeed re-launched the next fall, others appear to be sadly abandoned perhaps forever. Some were especially eerie as they had been hauled with no preparations at all, appearing as they had just come in from a sail with everything on deck, canvas, dinghies, outboards, flags, water jugs.  Now several years later the deck is black with mildew, the canvas shredded, the dinghies flat, outboards a corroded hulk, flags just a stub & water jugs dissolving in the intense Florida sun.

Our return trip thru the Port Mayaca lock was unique. The water levels had nearly evened out so no need to lock thru – he simply opened the gates & we cruised straight thru. This time we also noticed this “Pull Signal” – a “doorbell” for use by small boats who may not have VHF radios to call the lock tender.

This is the St. Lucie lock (the final one going east). This shot gives you a view of the entire system including the spillway. All are operated by the Army Corp of Engineers, many with adjacent public campgrounds & some with a few boat slips. It was so peaceful here & since ahead of schedule, we’ve extended our stay to nearly a week. It doesn’t hurt that it’s so inexpensive – only $15/night including power with a National Parks Senior Pass – at marinas we often pay nearly $15/night for power alone.

In a few days we’ll stop back in Vero Beach to receive our 2nd vaccine shots, have our mail mailed to us & stock up for our departure north to Connecticut & eventually Maine.

4 thoughts on “Crossing Back Across Florida to the East Coast”