Not every day you come across the Nina & Pinta cruising down the ICW.  These replicas had been

visiting Vero Beach, Florida & were now heading around to the Florida Panhandle, then up the Mississippi & eventually to Iowa.  Our AIS screen (to the right) showed them on approach (in case there was any doubt!).  A few years ago we had a similar sighting of the Charles W. Morgan in Buzzards Bay in Massachusetts – kinda crazy.

Where was the Santa Maria you ask?

We found the Santa Maria on the waterfront in St. Augustine. 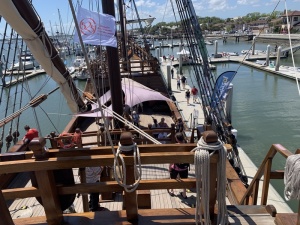 This replica was recently built in Spain (by a completely unrelated organization) & sailed across the Atlantic for it’s 525th anniversary.  As our dinghy was tied up on the same dock, we went aboard for a tour.  Here is a view from the poop deck.  Like all replicas, they are built with modern safety equipment, navigation electronics & engines, but was still a shock to see how small it was (even though it was the larger of the 3 ships).

One thought on “Heading North thru Florida”