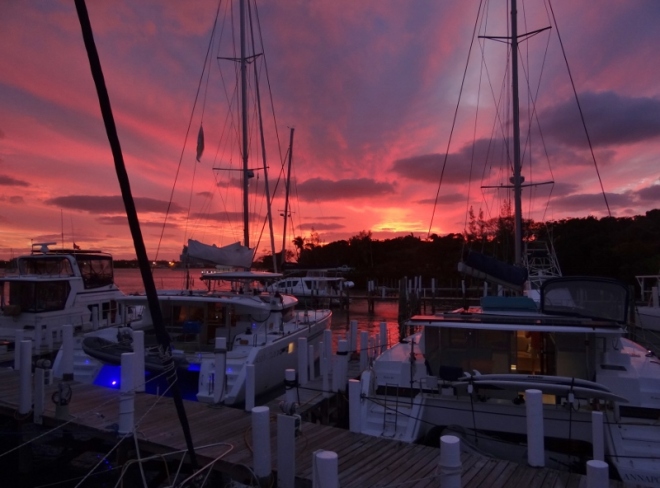 Glow the Red Sky at night. Soon will be our delight.

So who are these guys you ask?  Benj our 24-yr-old son, Pete’s Pub and Bar Jack the fish who came to dinner!  New Year’s Day was our long-awaited day, for our son would fly in from the cold VT northlands. How wonderful to see him walking down the dock (he got to the marina fast!) and collect that huge hug that time apart makes so necessary. I’d spent days baking and menu planning and praying the weather would cooperate.  Russ assembled his new fishing gear.

We dined on a lobster dish since Benj doesn’t get much seafood in VT, exchanged tiny Christmas gifts and basically basked in the joy of being together.

Cooking 4 tails a la shrimp cocktail method. Could also grill but I like this when using the meat in a dish, not alone.

Have you heard of Bees Wrap? It’s a reusable, washable food wrap. Billed as sustainable food storage, the large size is 13″x14″ and comes folded in a thin cardboard envelope. Made in Vermont of course.  Smells wonderful too!

Our traditional Babka and Benj’s gift of Bees Wrap

Tops on the “while I am here” list was Pete’s Pub and fishing, with paddle boarding and exploring close behind. Monday was a bit brisk but we decided to head down to Little Harbour to get started off on the right foot- well, the right beach bar anyway.

We like to save a project for Benj to help with; another tradition thing. This time, instead of sending our son up a 60 ft mast we sent him into the water to change the zincs. Sometimes “zincs” are made of aluminum but we still call them “zincs”.  We put new ones on when hauled out in September and you can see from the one on the right what it looks like now.

They sure do their job, which is to protect the propeller and shaft from electrolysis. 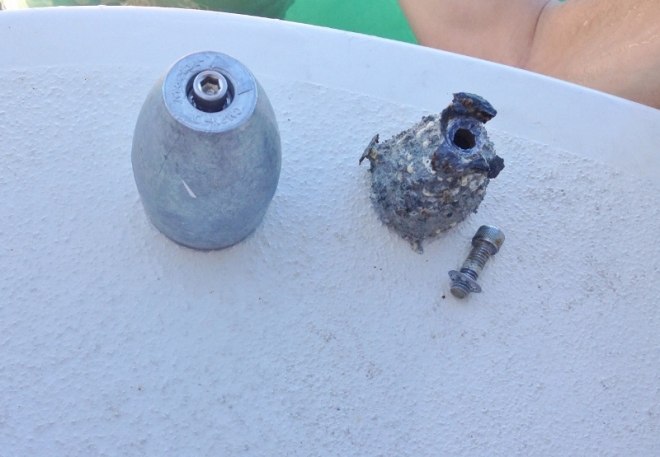 The brand new “zinc” and the 4 month-old one. 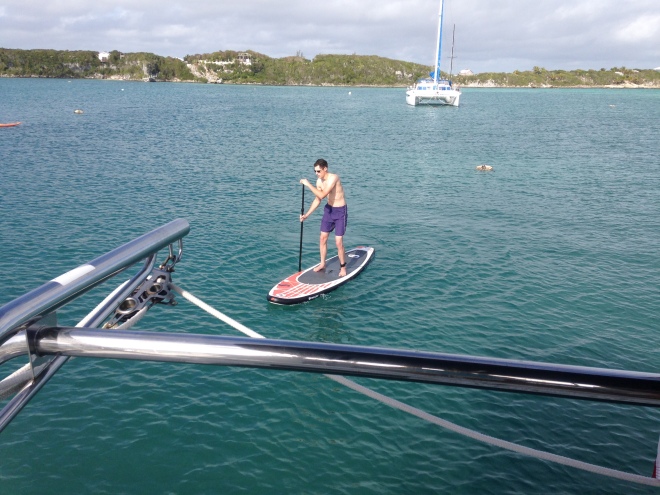 Time for fun. He took to this paddle board like a fish to water. Ah, youth.

Tuesday Benj & I walked over to the beach- had my sea glass baggies but no photo device. I collected a decent handful but Benj landed a fresh off-the-tree coconut. We like when he provides add’l food!  The tall palm had several coconuts laying on the ground but also several ripe ones still attached. In Skee-ball like fashion, he knocks one down on the second try and voila! We have fresh coconut.

Amazing guy; sees food, retrieves it and prepares it for delicious eating! Thank you!

Along the road back to the harbor we hear squawking sounds and yep, sure enough, a large flock of Abaco Green Parrots is hanging out in a small pine grove, taking cover in the palm trees and bushes as we inch closer. What a treat to see them up close and personal.

Earlier we’d seen a remora swimming around the boat. He/She appeared again when we tossed the coconut husk pieces in the water. I tried to get a decent shot while kneeling under the stern seat. 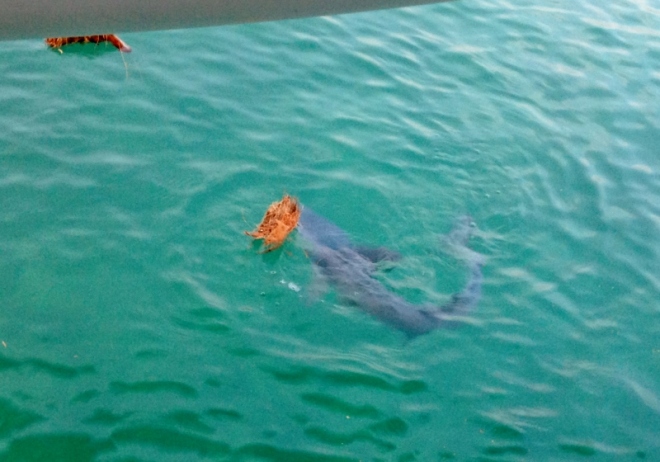 Remora checks out coconut husks. False food alarm and not anything worth becoming attached to. 🙂

The fishing gear got readied and inspected, while I tried to think positive thoughts about venturing out the cut to fish offshore. The guys went out in the dinghy- just out of the harbor- to test out the gear and prime the need-to-fish pump!

Little Harbour at chart bottom with the cut that line between the reef. Headed north to next cut at North Bar. We anchored where you see the circled A in pen at top left of photo.

Wednesday morning was good enough to venture out, so we did. Going out one cut, means you have to come in. That worked out well as Mr Bahamas Runner took a nibble and we reeled him in just before we were about to head back in at North Bar. 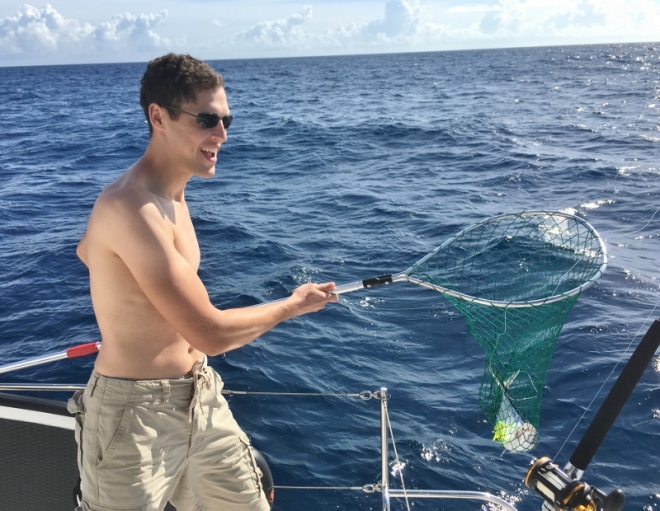 Same as with the coconut, Benj prepares the fish for eating.

Benj guts and fillets his Bar Jack, aka Bahamas Runner.

Fresh catch of the day: Bahamas Runner. Very good eating, despite looking rough around the edges.

Now- cue the Jaws theme and yes! It’s a shark fin moving through the shallows about 5 yds next to us. We all agreed, shark- color, movement looked right, and the book listed at least two possibles for our area.
Let’s see, another blessed low wind day; what shall we do?  Have bait, will fish. The best part, once again did not get photographed; we saw several nurse sharks resting in sandy patches between what was mostly all grassy bottom, on our way out. Maybe the remora needs to leave Little Harbour to find a host.

A bite but no catch. Dolphins though, but not the usual variety.

We came back in at Tilloo Cut which is right at Tahiti Beach with a couple of teeny cays alongside as you enter and turn left. Very scenic. 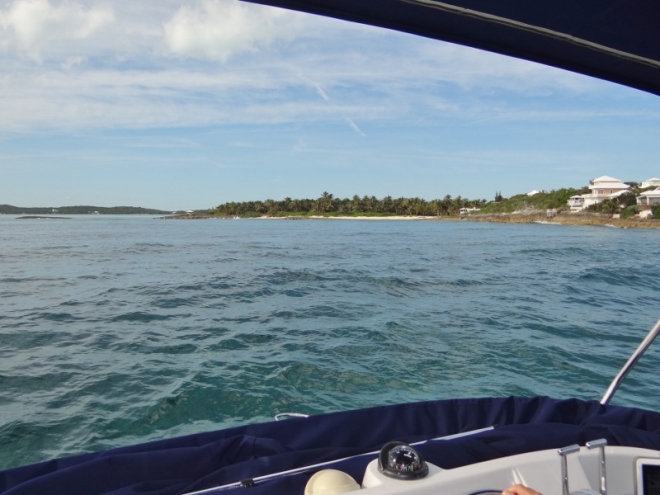 Tilloo Cut- looking at the backside of Tahiti Beach.  That sandy beach has decent beach combing

A quick lunch aboard then we moved up a mile to anchor off Firefly Resort. Yes, we made it to Firefly for dinner that night!  The next morning, Friday, rather than move the big boat back down to Tahiti Beach Russ ferried us in the dinghy. Me first, then Benj with the paddle board. 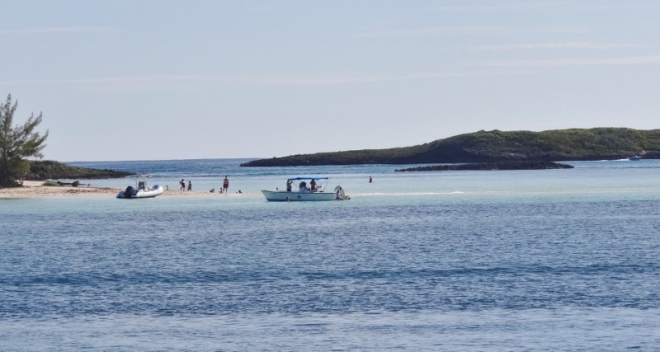 The next day- looking at Tahiti Beach and out the cut

Heading slowly out Tilloo Cut behind a charter cat. Blue and calm- just how we like it

And what do you know, another lovely low wind day. By this time I was with the fishing program and actually looking forward to a leisurely (one engine speed 4kts) trip up and around Elbow Cay, entering back in to the Sea of Abaco at North Man o’ War cut. Unfortunately the fish weren’t biting at all.

Seeing Elbow Cay from the outside was a new one for us and after coming in the cut by Man o’ War Cay we had now used three new cuts for a total of four; the only ones we would ever use because Whale Cay cut as you may recall, is one we will never use.

Every morning at 8:15 is the Abaco Cruisers’ Net: weather, Sea of Abaco conditions, cut conditions, community, invitations (local businesses/restaurants), open mic.  The cut conditions are often rated 1- 5, with 5 being the best. I give each one we used between Wednesday and Friday, a Fantastic 5.  Trauma or turbulent 2 or even a Tempting 3 – no way do we do the cuts then.

A cold front would arrive late Saturday so we ended up in Hope Town, on the same mooring as 10 years ago when we chartered a Maine Cat 41 through Cap’n Ron (Abaco Multihull Charters).

Saturday we packed in as much as possible; farm market, walk through town, a visit to Om Grown Greens, beach walk and a late afternoon lighthouse tour.

These organically grown sprouts, shoots and micro greens began as a personal endeavor and grew into a small business. Om Grown provides their freshies to a handful of grocery stores in the Northwest Bahamas. Every other Saturday they are the main attraction at the tiny farmers market in Hope Town. More great timing for us as now we could stock up (they make a delicious sunflower sprout pasta salad with thick spaghetti, EVOO & garlic) and Benj could farm chat. The owners invited us to see their operation, so we stopped on our way to lunch at On Da Beach. 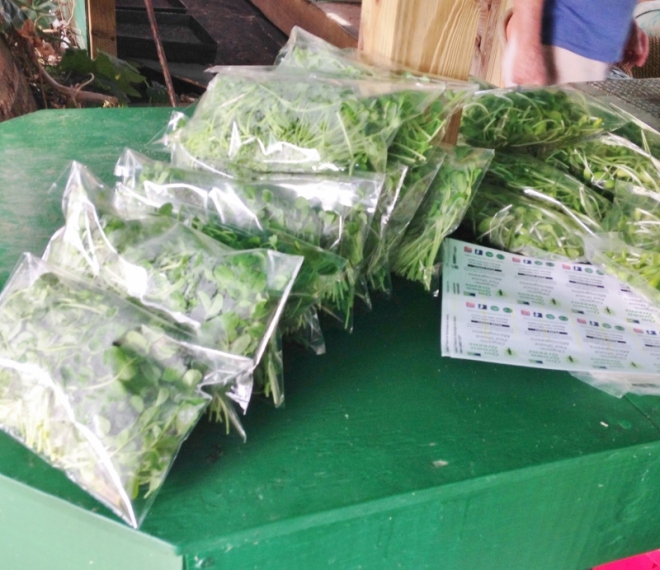 Ready for delivery to market. Hardy sprouts- they last a full week in the fridge

Perfect timing also, to see the action at the lighthouse. In addition to the window re-glazing, an expert had been called in to assist and instruct on how to overhaul, clean and maintain the kerosene system, which hadn’t been done in decades.  While the kerosene lantern was out of commission during this time, a large light-bulb filled in.

Temporary light-bulb while kerosene lantern is down. It is whiter than the warm kerosene glow. 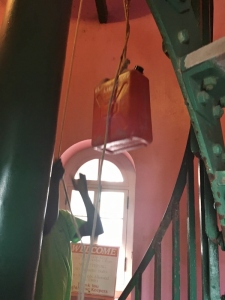 Remember that pallet of kerosene jugs shown in a prior post- they are getting hoisted up now. 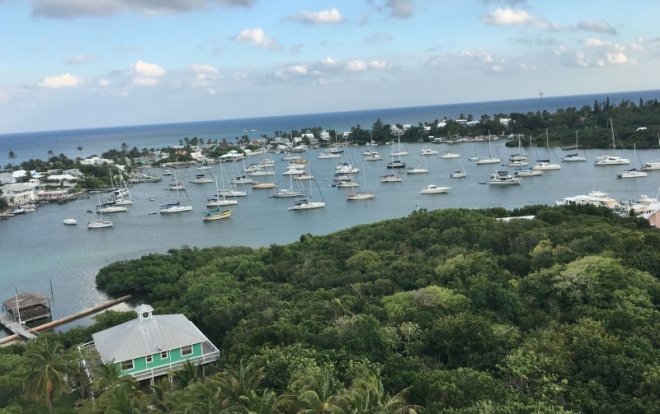 Harbour view from lighthouse -Twin Sisters is left of yellow power cat, near top of harbour

Sunday found us snug aboard all day, the wind howling and the temps dropping to mid-60s. Monday Benj took the ferry over to Marsh Harbour, ending up safely and uneventfully back in Vermont later that night.

We would linger another 5 days in Hope Town before heading the few miles over to Marsh to stock up. Tuesday, January 17 we’d head back down to Little Harbour to stage for departing the Abacos Wednesday morning.  Exumas bound- see you there!!

2 thoughts on “A New Year with: Benj, Pete and Jack”

Secure at Loggerhead Marina in Vero Beach, Florida until March… or longer.