The area we are in is called Maine’s mid-coast. I am not sure why but Port Clyde seems to be a very well-known place even though it lacks the bustle and plethora of shops of Boothbay Harbor or the cultural scene of Rockland. Maybe that’s the charm. 🙂

When I was a very much younger child I visited Port Clyde (along with other Maine locations) with Mom and Dad, so I was curious to see what might be recognizable, or not. I recalled tall docks with lobster traps (and I guess back then the traps were wood?), a few shops and a green building. 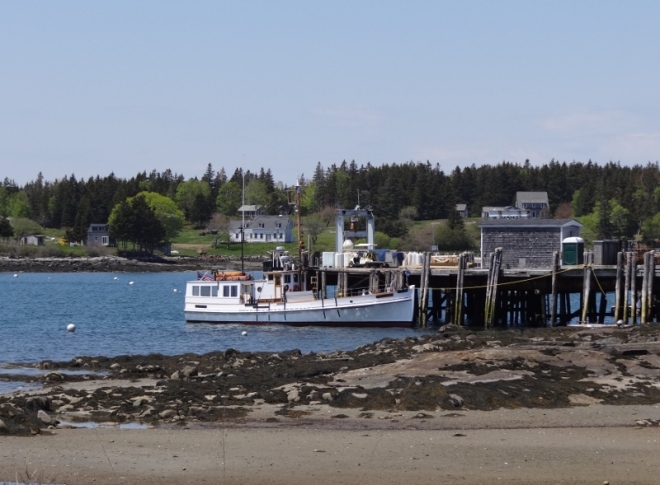 Seaglass was lying around waiting for us to pick up those precious pieces; a few even looked old and were properly smoothed by sand and water.

Linda Bean’s Lobster Traps called to us. What the heck are those you say? I’d been seeing ads in the paper for Linda Bean’s café; was this a Bean of THE L.L. Bean fame? Ah yuh, sure was. We wandered into the most inviting and practically only shop in town, the Port Clyde General Store and yes, it was green. 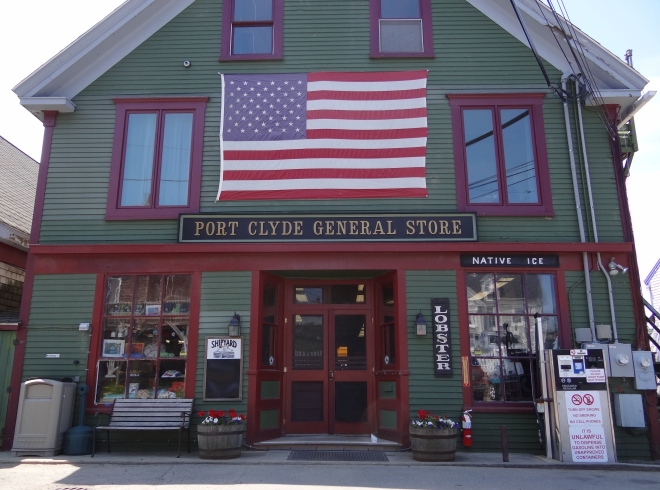 Roughly equal parts grocery, café, and gift shop, the upstairs contained a small art gallery. On the wall leading up I stopped to admire Andrew Wyeth’s “Christina’s World”, one of the best-known American paintings of the middle 20th century. It depicts a woman lying on the ground in a treeless, mostly tawny grass field, looking up at a gray house on the horizon; a barn and various other small outbuildings are near the house. I’m sure you know this painting; if I do then anyone would! ( my reason for mentioning this painting will become clear later)
So back to lobster traps; not the type the lobsters crawl into, but edible ones that less creative preparers term lobster ravioli! They scored extremely high on our list of favorite lobster ravs; the filling really was nearly all lobster.

Delightful reading all over the package 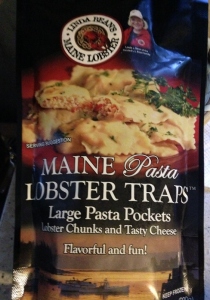 The Marshal Point Lighthouse sits on the point; dare I suggest it’s called Marshall Point? Just a couple miles south of Port Clyde. As you can see the lighthouse and keeper’s house were separate and back in the day the walkway was covered. This must have been one of the cushier outposts; not on a rocky god-forsaken island, pleasant living accommodations and a not horribly tall lighthouse to manage.

The house and kitchen addition are now a (free) museum with easy on the eyes displays of local industry, mainly lobstering and quarrying. Family history is important too and we got a huge kick out of seeing our name many times.

How clever is this display of a family tree?

In late 80’s we found and drove around Rackliff Island

Our ancestors were very advanced!

Part of the extensive genealogy research that Russ’s dad compiled, was finding Rackliff Island, located between Rockland and Tenant’s Harbor. I’d remembered that years ago (BB- before Benj) we drove up to spend a few days near Ogunquit, staying at a motel in Wells. The drive to Rackliff Island had to have been long and sans GPS- imagine! But we found it by asking around once we got to Thomaston and drove over a short causeway to a pine tree forested island with a few homes and many lots for sale.

Are these “Rackliff”s related to William Rackliff (Rackleff) or to Russell William Rackliffe? Not sure, but we have enough data to continue the research should the urge overcome us.

One room contained genealogy and notebooks full of local info.. and a gorgeous water view

Also in this room sat a table and on it a notebook with pictures and info about the locale filming of the tiny scene in Forrest Gump where Forrest (but Tom’s brother Jim really did the scene) during his coast to coast run, arrives in Maine. Inspired, we watched the movie that night. Near the end is a scene where Jenny approaches her childhood home which is now dilapidated and loaded with bad memories. She begins throwing rocks at it, then collapses on the ground, a la “Christina’s World”. I didn’t make the connection at the time, but a fleeting sense of recognition poked my subconscious.

When we checked it out, wow did that movie have even more historical nods than we’d caught. Savannah, of course was the setting for Forrest on the bench but although the story is set in Alabama I wasn’t sure that the filming happened there. Russ (who has more time and a better, faster iPhone) is our resident researcher and asked me to guess where most of the movie was filmed (the town, Forrest’s home, etc) and digging deep…   I answered, Beaufort, SC! The look he gave me- astounded and amazed!! Eyes could not have been wider- how did you know? Oh just a WAG, but an educated one- hey we’ve been through there more than once. This was just days after I correctly named the location (Wrightsville Beach, NC) of another movie. But I’ve digressed.

Wyeth’s “Christina’s World” was indeed the model for that scene and when you see them side by side; it’s uncanny. Do you think that painting hung for easy viewing at the General Store on purpose? I do. The painting location was Cushing, which is across the St George River from Port Clyde; very local.  Click here to go to Artsy’s Andrew Wyeth page and enjoy more fascinating Wyeth artwork.