Another jaunt into Key West led us to the Shipwreck Museum where we learned more than our brains could hold about “wrecking”, or the business of salvaging ships.

When Florida officially became a U.S. Territory in 1821, Key West became the center of one of the most lucrative businesses in history; that of salvaging ships. Several events spurred this on. In 1822 John Simonton, the first land owner of Key West, helped convince the U. S. Congress to create a new district for customs collection for the south Florida coastline. Soon after, President James Monroe designated Key West as the Port of Entry, which meant that wrecked goods from foreign countries, with payment of duties, could now be handled locally. A booming business was born.

In 1825 Congress enacted a law prohibiting the carrying of wrecked goods on the Florida coast to any foreign place and required all such goods to be brought to a port of entry in the U.S. This drove out any foreign competition and now even more duties got paid through the customs house in Key West. The next important event was when Congress established a federal court in Key West, locally known as the “Wrecking Court”. The court licensed Wreckers and oversaw the business that was rapidly propelling Key West and her 800 or so inhabitants into a place of wealth.

So how many ships wrecked on the reefs fringing the coast of the Florida Keys? On average, about one per week! In the 1850s Key West was easily the richest city per capita in the United States; in the two years of 1855 & 1856, 151 ships required some sort of assistance from “Wreckers”. Talk about the boom years! 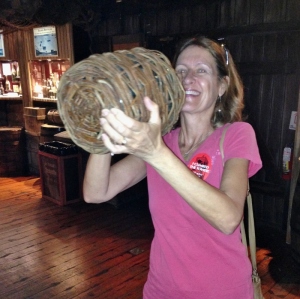 I’ll drink to that!

The business was quite organized and the court judges punished infractions. The sloops and schooners that rushed to the aid of wrecked ships were owned by either the sloop’s captain or a separate individual. The crew, the captain and owner all shared in the profits derived when the salvaged goods sold in the huge markets and warehouses in Key West. Only the first sloop or schooner to reach the poor wrecked ship got the money but it was not uncommon to share a portion with others who assisted.

View from atop the tall watch tower

The lowest level of the museum was a former cistern and our noses detected that musty -salty-water odor right away. Among other items it housed a wide-screen TV that ran a 14 minute narrated story using old movie footage and a place we recognized immediately; Mystic Seaport with the Charles W Morgan in the background.

2 thoughts on “Key West and the Glory Days of Wrecking”