“When 2 beers turn to 10, oh I’ll never leave Nippers again.”  Leaving we must do, but we return like waves to the shore, every year to dance, drink frozen Nippers, meet up with friends and people watch to the max. 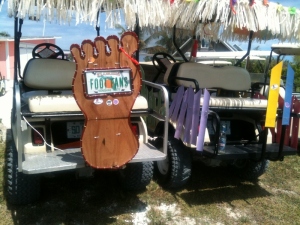 Serious fans decorated their carts. We met them at the “front line.”

This year the Barefoot Man and backup band Sea ‘nB played a week later than the prior two years. With far fewer college-break party-ers, we older folk ruled the event. Nippers was crowded but not so much that you couldn’t squeeze a mosquito through a needle eye; dancing, buying drinks, talking and moving around could all be accomplished without swapping sweat with everyone you came near.

Barefoot Man with Sea’nB and guest

We sorely missed our land friends who we’d met in 2012, but get this; they sent a long distance greeting through cruiser friends on s/v Pelican who actually found someone during the concert who knew us and helped us connect.  We’d even seen Pelican as we both neared Little Harbor on the trip up to the Abacos 11 days ago; they passed us and waved- who knew?

In lieu of table dancing this year, I opted instead to have George, aka Barefoot Man add his signature to my suntan.

Thursday night (the free concert was Friday 1-5pm) we listened to the excellent  New Entry Band as they played at Grabbers about 300 ft in front of us … and the 30 or so other boats anchored. Friday, not a party-pooper kind of day, we went in for the 8:30pm Junkanoo. We’d no sooner nestled our butts on a bench when Achar stopped to give us the bad news: the ferry bringing the Junkanoo band had been hit by a rental boat leaving Marsh Harbor (injuries) and the Junkanoo wouldn’t be starting until closer to 10pm.

The music was excellent and from the boat we could sorta see the beautiful costumes too. :-). Ok, so after 9pm we are party-poopers.

Deep River, CT for the rest of spring & perhaps part of the summer.