Monday- a fuel saver day! After the 45 mins to leave Sarasota- heading out Big Pass(as opposed to New Pass which is newer but not better)- up went the main and jib and we flew south in 18-20kts on a starboard tack, averaging over 7kts.  As usual this did not last all day, but we did sail all the way to Boca Grande Pass, dropping sail at 2pm and motoring the remaining 4 miles. Another first: we dropped anchor in the narrow Boca Grande Bayou, a canal like cut into Gasparilla Island, and stern tied to the mangroves. Boca Grande is comprised of several islands; Gasparilla being the largest, most famous and infamous.
It is supposedly named after the pirate Jose Gaspar who plied the waters from Sanibel to Tampa in the late 1700s and early 1800s.  Legend has it that the women he captured were kept- guess where? Yes- that would be on today’s Captiva Island.  His legendary treasure is buried somewhere in this area, and if you don’t hear from us again, you’ll know we found it.

Stern tied to mangroves at Gasparilla in the bayou

Our spot is 150 feet from a small public dock where the tie up is easy and one could comfortably climb off the dinghy in a skirt. While warmer here than Sarasota (73 at 3pm) today was not a beach day but walking into town I only needed a light jacket.  A stone’s throw from the dock is the Pink Elephant restaurant and the short walk into town brought us to a main area that I can only describe as a blend of Block, Martha’s Vineyard and Cuttyhunk.  We picked up a Boca Visitors’ Guide to learn more. Gasparilla has a 7 mile bike path that runs the entire length of the island and with bike rentals right in town, we decided to stay Tuesday and bike around- assuming the T-storms and rain would hold off.
Sure enough, the weather gods smiled upon us and the morning was warm and sunny. In prep for the wind and T-storms that were on their way, we tied another stern line to the mangroves and put our second anchor (a Fortress) in. First time for using it; I think we are running out of “firsts.”
As proof that the island is very bikeable- the rental bikes are all “an earlier era” style; one speed, brake with the pedals, cool colors and add a basket in front. With map in hand, off we pedaled; the flattest 5 miles I ever biked. The more I saw, the more I fell in love with Gasparilla. Great, we’ll stay.

Water was a consideration; none at the docks and the next stop didn’t have any either. So…… we spiffed up a bit after the morning bike tour and lunched at the Pink Elephant, or the “Pink” if you want to speak in island lingo- you know, like the Griswold Inn is the Gris. Not only did I enjoy an excellent Mojito, the Roasted Vegetable Flatbread was Outstanding! We ate on the patio, out of the wind with our boat in view. Our waiter, Chad from Ohio, was not the friendliest but we were easy customers and when he asked us, “is there anything else I can get you?” we made our water request. He didn’t flinch, and even said he’d meet us over by the faucet. Lugged our two jugs twice and added 20 gals to keep us going.

Tuesday evening brought rain, thunder and lightning. Miraculously the wind died and changed direction, making our second anchor do most of the work. Glad we had it out. The very cool thing about being stern tied, is the lack of swinging; for me that’s a big plus. We watched the NOAA weather and The Weather Channel (iPhone app) weather carefully; when we aren’t figuring out where to go, we are weather watching.
Wednesday morning we enjoyed a terrific breakfast at 3rd Street Café then picked up a few groceries at Hudsons. 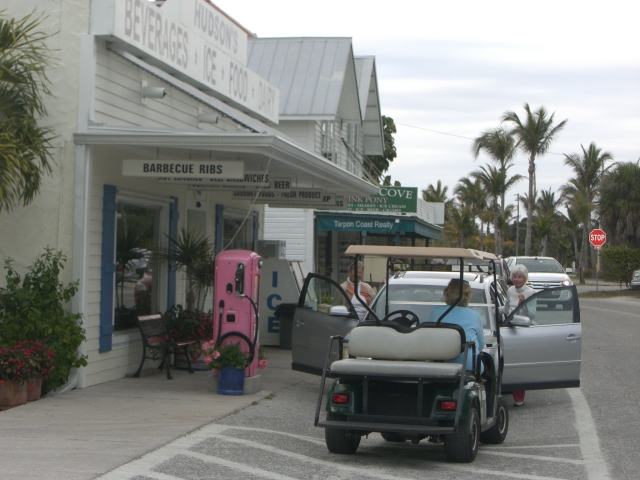 Russ spent the next few hours with the phone on his ear, trying to coordinate a heating oil delivery. Yes, we are glad to not be in four feet of New England snow, but it sure is making things tough with the house not being sold. Much thanks to David for checking the house and giving us updates. Running out of oil a month ago gave us warning that we needed to make a few changes. Good thing we did, as the weather has worsened, much to our dismay.
An Osprey perched nearby, his constant calling out let us know he was hanging around.
Thursday we bid a fond farewell to Gasparilla, carefully extracting ourselves from the mangroves and pulling up the two anchors. Wind still 10-15kts- not exactly my idea of paradise- and the high temp today was BARELY 60! Let me say that the average February temp in the Exumas is high 70s- much more to our liking and something to look forward to for next winter. We moved five miles south to Cayo Costa an island just south of Boca Grande Pass where there’s a protected anchorage between it and Punta Blanca.